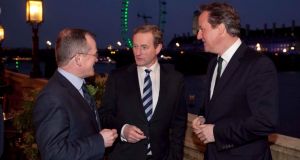 The responsibility for “socialising the costs of private failure” which led to the Irish taxpayer facing a €64 billion banking debt was “in the first instance the responsibility” of Fianna Fáil and the Greens.

He told a City of London audience “the error was compounded” when this became a condition by the European Central Bank for the 2010 bailout, when it feared Irish bank failures “would unleash panic”.


Concessions
During a number of speeches in London, Mr Kenny repeatedly emphasised the need for concessions on debt interest rates – a subject currently under negotiation with other EU capitals and EU institutions.

“The principle that there can be no shared European taxpayer responsibility for banks without shared control and supervision is reasonable,” he said in a speech in the Mansion House.

“But the corollary must also be true: where the policy for dealing with bank failures was determined at European – and not national – level, so too must the burden of the legacy costs of those policies,” he added.

“At European level we need further assistance to reduce Irish taxpayers' exposure to our banking system as we sustainably to return to market financing.”

Saying no previous Irish leader has been faced with an economic crisis of such magnitude, he said relationships had to be rebuilt to convince other EU capitals Ireland “would do what it said it would do”.

“These things require the building of trust and credibility and reputation with other governments. It has to be reflected around the council table also. Too often, where trust and indeed truth is missing, decisions are not the way that they should be,” he said.


Trust
Questioned later, Mr Kenny said he was not implying trust had been missing. “It is fundamental that governments trust each other,” he added.

He went on to argue that Irish banks “need to accelerate the work-out of mortgage arrears and other non-performing loans”, saying he hoped for progress this week. Such changes, he said, would give “confidence to investors and visibility and hope to the tens of thousands of families and small businesses in debt difficulties”.

Irish banks need to cut their costs, he said, while “after a decade of a property boom and bust there is a need for the banks to re-skill in order to improve their ability to lend prudently into the real economy”.

“We see the British relationship with the EU as being a two-way relationship – Britain benefits from its membership of the EU, and the EU is better off with Britain as a leading member making a valued contribution,” he said.

The UK's membership benefited Ireland, too: “Having the ability to work together within the European Union on the many issues on which we are of like mind – the single market, trade and so on – amplifies the impact of our excellent relationship generally,” he said.

“Both our economies are closely tied in so many ways and we want this close relationship to continue and be built on for many generations to come.”