Superquinn brand to be dropped by new owners 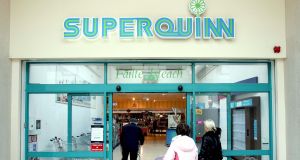 Superquinn, once one of the country’s most successful and well-known retail brands, is to become a thing of the past.

The chain’s 24 shops are to be rebranded as Supervalu from next February.

The move to merge two of the biggest players in Irish retail was announced today by Musgrave, which owns both brands.

As a result of the reorganisation, 102 staff at Superquinn’s support office in Lucan are to be made redundant, Musgrave said.

The merger will not, however, affect the 2,500 staff working across Superquinn’s branch network.

“We understand that some customers will be sad to see the Superquinn name change.”

“However, the decision follows a considered review of all options and is an inevitable next step given the realities of a totally changed grocery market and what the Irish consumer now needs,” he said.

As well as the name change, Supervalu will invest €10 million to complete the refurbishment of the Superquinn store network.

“Shoppers will benefit from an improved in-store experience, better choice and value. Importantly, consumers will continue to enjoy all that they love from Superquinn’s heritage including its in-store ambience, great range, food experts and quality products such as the famous Superquinn sausage,” Mr Martin said.

Musgrave last year begun a comprehensive review of its Superquinn subsidiary , which it acquired in 2011 for €229 million.

Sales were declining by about 7 per cent annually when Musgrave acquired the business from consortium Select Retail Holdings.

Musgrave’s acquisition of Superquinn was agreed after creditors placed the retailer in receivership on foot of a €275 million debt secured against its properties.

The debt dated to the chain’s purchase, in early 2005, by Select Retail Holdings for €450 million.

Superquinn’s founder, Senator Feargal Quinn, said the loss of the brand was a bittersweet moment but he hoped that the Superquinn name might be kept in some form.

He opened his first supermarket in Dundalk in 1960, calling it Quinn’s supermarket and later introduced the Superquinn brand.

“So anything that’s lasted 53 years isn’t bad. So from my point of view, I’m happy that it lasted 53 years. I would have loved the name to have stayed for another couple hundred years but you know, you don’t win them all and I think that Musgraves know what they are doing.”

He said he was pleased that Musgraves was an Irish family business, rather than a multinational.

“And I like the company and I think they are doing a very good job with the company at the moment. But it’s eight years since I left so it’s no longer my baby.”

He said he would have preferred if all the 190 SuperValu stores had become Superquinn stores “but my chance of being able to convince anybody of that is rather slim”.

“But when I look back over the years I’ve seen many changes and you can’t anticipate in a very busy market place and a very competitive market place what’s the right thing to do. So I think Musgraves know what they are doing. They’ve got their finger on the button.”

“I’ve been kept up to date by the Musgrave people. They kept me up to date last month, last week and again this morning and told me what they planned to do. And at least, even if it’s only the Superquinn sausages that stay, well, that’s something.

“ But I still hope they might consider maybe the Superquinn name is worthy of keeping in some other forms as well. But whatever way it is, I recognise that’s business and that’s what happens.”

He said there had always been a question mark over the retention of Superquinn’s central distribution hub in Lucan, once he had sold the company.

“What I’d like to think is that everybody who has been loyal to Superquinn, all of those employees, all of those colleagues we’ve had over the years, will be able to continue there. And Musgraves are investing a lot more into the company in the next few years so I’d be confident it’s probably the right thing for the company.”

1 Aldi empire wracked by family feud
2 NatWest considers closing Ulster Bank in the Republic
3 EY Entrepreneur of the Year awards: meet four industry finalists
4 Will PTSB be Ulster Bank’s knight in shining armour?
5 Volkswagen close to selling its Bugatti supercar brand
6 Q&A: What’s this about a cheap new mortgage and can I switch?
7 NatWest confirms review of Ulster Bank as Covid-19 bites
8 Eason to hold meeting next month to approve €20m payout to shareholders
9 EU signals late call on Apple tax appeal as deadline looms
10 Don’t invest in an ETF until you understand the tax
Real news has value SUBSCRIBE