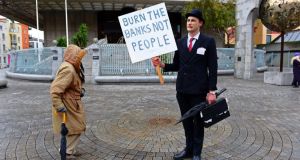 Complete reliance on austerity was not “a reasonable” way to go, Ashoka Mody, the IMF's former mission chief to Ireland, has said.

“Choice one was to bring in the bondholders and they would bear some of the cost of the sovereign distress. A second choice was to offer extremely concessional official financing. Third choice was to impose austerity.”

“We are seeing a belated recognition of the fact that the constraint imposed only by austerity was untenable.”

"Clearly the experience, if experience was needed, has demonstrated that reliance on austerity is counterproductive."

Earlier this year, Mr Mody said the legacy burdens of the crisis must be addressed.

“The alternative is unending human pain, a culture of national dependency and a fraying European economic and social fabric.”

He said the debilitating consequence of delays in debt restructuring has been unrelenting fiscal austerity – a silent tragedy that has no champions.

In May 2011, upon completion of its second review, the ECB-EC-IMF troika projected that Irish GDP would grow by 1.9 per cent in 2012. Instead GDP grew by an estimated 0.9 per cent. Growth expectations for 2013 have fallen from 2.2 per cent to just over 1 per cent.