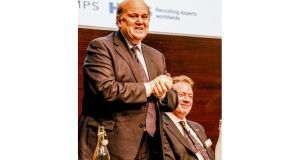 Stephen O'Connor, executive chairman of the Underwriting Exchange, listens to Minister for Finance Michael Noonan as he addresses a gathering of the Irish International Business Network in London yesterday. Photograph: Jacqui McSweeney

The Canadian insurers who bought Irish Life this week have paid nearly 20 per cent more for the company than they were prepared to do a year ago, Minister for Finance Michael Noonan said yesterday.

The purchase by Great-West Lifeco for €1.3 billion, plus a €40 million share of dividends, is evidence that Ireland has travelled “a reasonably good distance in the last couple of years”, Mr Noonan told a gathering of the Irish International Business Network in London.

“Now they are back. The price last year was €1.1 billion. Today, it is €1.3 billion, plus a slight bonus on dividends. That tells you about the Irish economy,” said Mr Noonan, who also yesterday met chancellor of the exchequer George Osborne.

The “effective” cost of financing the renegotiated promissory note debt is now 1 per cent, he said, because some of the interest paid to the Central Bank of Ireland will return as profits to the Department of Finance.

“Is it any wonder that there was a big knock-back on the cost of secondary paper? The ECB noted it without dissent. It is a legal agreement in accordance with treaty provisions. That was one good piece of work,” he declared.

He said the Government had not requested the UK reduces the interest rate it charges on the bilateral loan given in 2010, but Mr Noonan is hopeful a cheaper rate can be put in place.

“When changes were made in the conditions applicable to the funds previously – for example when interest rates were reduced – Denmark, Sweden and the UK applied the same new protocol to the bilateral loans.

“So while we haven’t raised it as a negotiating point, it will be mentioned, but not pressed very hard, because they willingly gave us bilateral loans. They willingly changed the conditions previously when the analogous conditions in Europe changed,” he said.

Relations with Mr Osborne are “very good”, said Mr Noonan, who joked they “had conducted most of our business in the sacred halls of the Kremlin” during three days of G20 meetings last week, where Mr Noonan represented the EU.

In a statement after their Downing Street meeting, Mr Noonan and Mr Osborne said they had “reviewed developments in the Irish economy and, in particular, noted the successful outcome to the promissory note arrangement, which enhances Ireland’s debt sustainability”.