Can exports save the economy?

The Government and its predecessor set out to create 300,000 jobs in an export-led recovery. Trade looks healthy, but we’re still waiting for all of the employment benefits 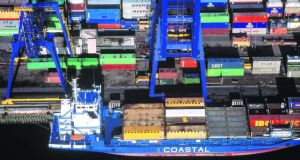 A month before the bailout, on October 27th, 2010, a strategy to help bring about an “export-led recovery” in the ailing economy was revealed by the then minister of state for trade and commerce, Billy Kelleher.

The trade plan aimed to employ a further 150,000 people in manufacturing, tourism and services; the idea was that the impact would be doubled with the consequent creation of another 150,000 spin-off jobs.

It was to be overseen by the Foreign Trade Council, a group of civil servants and representatives of State agencies such as Enterprise Ireland, Bord Bia and Science Foundation Ireland, which held its first meeting to coincide with the plan’s publication.

Eleven months later Eamon Gilmore, the Minister at the reconfigured Department of Foreign Affairs and Trade, hosted the inaugural meeting of the Export Trade Council, involving other Ministers and representatives of State agencies, as part of the new Government’s pledge to do “all in its power to support an export-led recovery”.

For some years our political leaders have embraced exporting as a way to help the economy recover. But, three years on, the 300,000 jobs have not materialised. Are signs of an export-led recovery emerging?

Ireland’s reliance on exports is nothing new, says David Duffy, an economist at the Economic and Social Research Institute.

“The ability to access export markets has been important because so much of our industrial policy, going back to the late 1950s, has focused on attracting foreign direct investment,” he says. “We’re a small open economy, so we have a small domestic market. In order for there to be a sufficient critical mass of activity to generate economic growth and employment, we do need to export into other markets.”

Despite a sluggish start to 2013 in the influential chemical and pharmaceutical sector, Irish-based firms have made a good fist of this in recent years. The value of goods exports, which include pharmaceuticals, food and machines, increased in each of the past four years, from €85.8 billion to €92 billion.

The value of service exports, which include insurance, legal advice and financial and computer services, has risen more sharply, increasing from €68 billion in 2008 to €81.4 billion in 2011.

“In rough terms, exports of goods and services in 2012 were €177 billion and gross domestic product was about €164 billion, so you could say we export everything we produce,” Duffy says.

The difference between what we import and export is counted when calculating GDP; the Central Statistics Office’s quarterly national accounts show that net exports increased from €17 billion in 2008 to about €35 billion in 2011 and almost €40 billion last year.

These figures contributed to modest growth in GDP, which rose by 1.4 per cent in 2011 and by 0.9 per cent in 2012. But the solid performance of exporting companies has not been enough to even start to address arguably the greatest legacy of the economic collapse: unemployment.

At the end of 2010, just before two years of economic growth, 1.857 million people were employed in the State, according to the CSO’s national household survey. This fell to 1.848 million by the end of last year. The number on the live register has fallen by about 18,000 since the Government was elected, two years ago, to 426,100, but the number in work has also dropped.

“Any growth taking place in the economy at the moment is really on the back of growth in the export side,” Duffy says. “An export-led recovery would be if that growth continues and, over time, growth in the export side feeds down into the domestic economy, whereby it benefits from the activity and spending linked to the export companies.” According to an Irish Exporters Association report, five of Ireland’s top 20 exporters last year came from the pharmaceutical-chemical sector, which accounted for €55 billion of our exports.


Significant growth
Dr Chris van Egeraat, of the NUI Maynooth school of geography, says Ireland’s chemical and pharmaceutical sector managed to record significant growth in the face of the global economic crisis, with the value of exports rising by 41 per cent between 2006 and 2011.

But he says Forfás employment data shows that employment in the sector fell by as much as 10 per cent over the same period, a trend that van Egeraat classifies as “job-shedding growth”.

“CSO and Forfás figures show the pharmaceutical-chemical sector employed between 25,000 and 32,000 people in 2011,” he says. “So between 1.4 and 1.8 per cent of our workforce accounts for 62 per cent of our merchandise exports.”

Van Egeraat says he is therefore sceptical that a growth in exports will quickly help the economy to recover. “That is particularly determined by the relatively few people actually involved or accounting for this growth in our exports, ” he says. “We have actually seen a fall in [overall] employment. The idea of recovery has to focus on job generation. So long as unemployment is not resolved, we are not going to see recovery.”

Van Egeraat also points to the manufacturing sector, where CSO figures show that employment dropped by about 89,000 between 2000 and 2011. In that time, the contribution of manufactured goods, such as machinery, telecoms equipment and computers, to total goods exports fell from 41 per cent to 11.4 per cent.

The slowdown in manufacturing was underscored recently when the Government announced a plan to stimulate the sector and create a further 20,000 jobs by 2016. Minister for Enterprise and Jobs Richard Bruton insisted the sector had levelled out and started to turn a corner.

The downward trend in some of the State’s more established industries, and the perceived potential for growth in service exports, shines through when examining the kind of companies now investing in Ireland.

“The difference between manufacturing and services is that services activity can come in a lot quicker and grow a lot faster both in terms of employment and exports in some cases,” McDonagh says. “In a typical manufacturing case there could be building construction, which in life sciences or biotech could mean a wait of two or three years. In services they’re looking for a good-quality office environment.”

“The FDI sector is taking a very strong step forward,” McDonagh says, “but there is a lag, in that after taking a step forward we’re looking behind to see if the domestic economy is coming with us, and we’re finding that is slow to happen. There is a two-speed economy.”


Upward curve
This international picture has prompted the Irish Exporters Association to trim its 2013 export-growth forecast for the sector from 5 per cent to 3 per cent. “Growth of 5 per cent would have seen good solid job creation,” says the association’s chief executive, John Whelan. “At 3 per cent you’re back into people marking time and waiting for signals that markets have improved before they go after full-time recruitment.

“The position that we have always maintained on the export-led recovery is that exports need to be growing at a level of 7 per cent per annum before it actually kicks in, in terms of significant jobs growth, and, on the back of that jobs growth, more general consumption in the economy. Unfortunately that hasn’t materialised yet.”

Bruton is more confident that recovery is coming, saying 1,000 private-sector jobs are created every month and that exports are a significant factor in that.

“There are still some elements of the domestic economy that are in correction and dragging us down, but overall the export growth has broken through and is carrying the whole curve upwards – and that is a significant turnaround,” he says. “We have come from 90,000 jobs a year being lost in the private sector to 1,000 a month being created. Exports are the heart of that, and now we have to keep at it.”