Blinkered thinking at the heart of Ireland’s economic crash 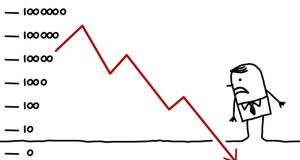 “By early 2007 at the latest, the property market was already collapsing and all that remained was for the true scale of the banking and budgetary debacles and the implications for the taxpayer to eventually come to light.”

Traditionally the Irish, who can sing the dead to sleep, have been good at organising wakes. The financial wake of 2008 is another matter. 2008 will be known as the year that initiated the great financial crisis, just as 1847 has gone down as “Black 47”, the year when the Great Famine peaked. “Black 47” involved a massive loss of population and a debilitating legacy of emigration. “Black 2008”, while not as catastrophic in human terms, caused extensive damage to a sizeable part of Ireland’s economic fabric and had major repercussions for all parts of Irish society.

Our recent book (The Fall of the Celtic Tiger: Ireland and the Euro Debt Crisis, Oxford University Press) seeks to provide a balanced assessment of the main domestic and international forces that help to explain Ireland’s economic crisis that was triggered in September 2008. Based on a detailed and analytical examination of all the available evidence, the book shows how Ireland experienced four crises – a property crisis, a banking crisis, a fiscal crisis and a financial crisis. It addresses several key questions.

International dimension
The first of these concerns exactly who or what was “to blame” for what happened? We conclude that while the international dimensions (the prevailing philosophy of light regulation, the inadequacy of the EU stability and growth pact and the inherent architectural flaws of the euro zone) were important, major responsibility lay at the domestic level.

However, “blame” is a multidimensional concept. There were those who benefited greatly from and acquiesced in the artificial riches of the boom (most of Irish society and not only bankers, developers, and the accountancy and auditing professions), those who were “cheerleaders “ for the good times (principally politicians of all parties , especially during the 2002 and 2007 elections, as well as most of the media) and the “experts” (the Financial Regulator, the Central Bank, the Department of Finance, and the economic profession generally). All share responsibility, in different ways, for the fact that, collectively, “we lost the run of ourselves”.

The second question is whether, once the crisis began to emerge, there was anything that could or should have been done differently to reduce the massive costs to the taxpayer or to avert the arrival of the EU-IMF troika in late 2010?

Budgetary debacles
By early 2007 at the latest, nearly all the property-related loans had been extended, the property market was already collapsing and all that remained was for the true scale of the banking and budgetary debacles and the implications for the taxpayer to eventually come to light. After considering all the alternatives, the authors conclude that, given the paramount need to avert a run on the banks (entailing with it potentially catastrophic consequences), by late September 2008, some form of comprehensive bank guarantee could not have been avoided. Moreover, given the enormous underlying budgetary deficit – a major problem quite separate from the banking losses – subsequent intervention by the EU-IMF troika became inevitable despite the government’s vain efforts to stave this off.

Historians will doubtless debate the above issues for many years. But there is a third question that is critical going forward, bearing in mind that this is the second time in 25 years that Ireland has faced major financial difficulties that were largely of its own making. What lessons can be drawn about the Irish policy-making process to help prevent yet another crisis some time in the future?

First, there is a clear need to pay more attention to learning both from history and experiences elsewhere. The 1980s crisis was a classic result of a small, open economy relying on a major fiscal expansionary policy financed by foreign borrowing. Although Ireland’s recent property bubble was similar to that seen across many other countries throughout history, many erroneously ended up believing that this time we were somehow “different”. The study of history, including economic history and the history of economic thought, is still of paramount importance to avoid the excesses of those who believe the present is unique and the past of little relevance.

Spectacularly wrong
The absence of sufficient questioning and internal debate lies at the heart of the causes of the Irish crisis. Each component of the policy-making apparatus took solace from the belief that the other parts must be doing a good job and from the praise lavished on the Irish economy by official international agencies. These organisations’ judgments, which turned out to have been spectacularly wrong, seemed to have been unquestioningly accepted.

Second, any small economy, especially one on the periphery, needs to guard against insularity and lack of familiarity with international developments. This implies that the key decision-makers have sufficient technical expertise and a broad range of experience – essential in today’s sophisticated environment. These elements were lacking in the run-up to the Irish crisis. While the approach has begun to change significantly in the last few years, it is important that this becomes embedded as ongoing practice.

Third, a recurrent theme was the tendency to dismiss “contrarian” views, whether in the Central Bank/Financial Regulator, the Department of Finance or the media. Those who did raise serious and unpleasant issues encountered considerable opprobrium – including from the rest of the media, lobby groups and senior politicians. A “comfortable consensus” stifled serious analysis of less benign possibilities and the preparation of contingency plans to deal with perceived low-probability but high-cost outcomes. Moreover, politicians of all parties did not see it as their job to probe the accepted view. Changing this would require a fundamental shift away from the current , largely “clientelistic” approach of the political system.

Fourth , there appears to have been some reluctance for officials to place their views explicitly on the record in advance of the emergence of a “consensus”. This may help explain, for example, the absence of detailed documentation surrounding the guarantee decision. However, such an approach does not promote the accountability that is essential for good policy-making.

Finally, it could be suggested that some of the above tendencies are inevitable in a small country where personal relationships are long standing and sharp disagreements could cause friction. However, the record of other small countries does not suggest that this is inevitable. Indeed a constructive step might be for Ireland to study closely the decision-making processes of countries of similar size and cultural homogeneity.

The next crisis
It may well be a long time before the emergence of another property bubble, reckless lending by the banks, or a return to fiscal profligacy. But another crisis in the future – from whatever currently unknown source – cannot be excluded. In the authors’ view, a wide-ranging and systematic reflection on what is required for Ireland to establish a fundamentally sound policy decision-making process is called for, so as to help to guard against another crisis such as the two already experienced in our short history.

Donal Donovan is a former deputy director of the International Monetary Fund and a member of the Fiscal Advisory Council; Antoin Murphy is a fellow emeritus of Trinity College Dublin

1 Knock gets visit from world’s largest passenger plane
2 How do you know if you are wealthy? It’s not straightforward
3 Galway development could transform skyline with 21-storey tower
4 Planning permission refused for major new office block in Galway city centre
5 How can I view my dead brother’s will if I’m not the executor?
6 Chinese state may bail out Avolon’s main shareholder
7 Barclays scraps system monitoring how long staff spent at desks
8 Judge asks if injunction being sought ‘to facilitate a dog’
9 High Court overturns permission for height increase in Johnny Ronan apartments
10 Don’t die before you read this: what happens to your money if you die unexpectedly?
Real news has value SUBSCRIBE