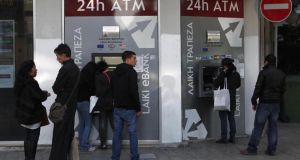 People wait to use the ATM machines outside a Laiki Bank branch in the Cypriot capital Nicosia yesterday. Photograph: Petros Karadjias


The Cypriot parliament will hold an emergency debate this afternoon on the terms of Cyprus ’s bailout deal amid mounting public anger about a decision to tax depositors.

As markets open today, euro zone leaders moved to quell fears the deal secured over the weekend could lead to contagion, insisting Cyprus was a unique case.

Last night Cypriot authorities were in negotiations with euro zone officials on plans to ease the terms of the island’s bailout for smaller deposit holders.

Finance ministers, including Minister for Finance Michael Noonan, reached an agreement on Saturday morning on a long-delayed bailout for Cyprus which includes an unprecedented measureto levy depositors.

The Irish Government welcomed the agreement, describing it as a “positive development for Cyprus, the euro zone as a whole, and Ireland ”.

“The Cypriot case is a complex and difficult case and it was a significant achievement to reach an agreement between all parties,” a Department of Finance spokesman said yesterday. “This agreement provides a sustainable solution, which deals with Cyprus’s financial system and its funding requirements.”

Cyprus followed Greece, Ireland and Portugal in seeking a bailout last June after its banking sector was heavily exposed to Greek debt. Spain has also requested a €40 billion bailout for its banks.

Cypriot economist Sophocles Markides told The Irish Times the EU’s handling of this crisis could “finish off Cyprus as a financial centre”.

He warned the proposals could have negative dynamic repercussions across the euro zone as deposits under €100,000 are, by law, supposed to be guaranteed.

Lines formed at ATMs on Saturday morning when depositors attempted to empty accounts after they learned of the pre-dawn deal. “We’re the first to be punished in this way although four other countries have received bailouts,” complained a woman outside a branch of Laiki Bank.

A limit of €400 was placed on every ATM customer and electronic transfers were blocked. Co-operative banks, which unlike commercial banks do business on Saturdays, opened early but closed after an hour, fearing a run by small depositors.


Popular anger
Cypriot president Nikos Anastasiades sought to assuage growing popular anger. In a brief address to the nation last night, he appealed to Cypriots to support the deal, arguing the alternative was instant bankruptcy of the island’s two main banks and the banking sector, with the loss of 8,000 jobs and economic collapse. “The solution we concluded is not what we wanted, but is the least painful under the circumstances.”

He also said he was battling with euro zone lenders to limit the impact on small depositors.He said depositors who retained their accounts would be given shares to half the value of sums deducted and benefit from revenues expected from the sale of natural gas from vast offshore fields.

While the new levy will be applied to accounts tomorrow, the ECB is understood to be pressing Cyprus to introduce the levy today.