The phrase ’fiscal space’ is being used a lot these days by politicians, economists and media commentators. We asked some members of the public if they knew what it meant. Video: Bryan O'Brien 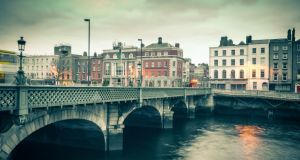 Ireland has retained its status as the European Union’s fastest-growing economy, according to European Commission forecasts published this morning.

The Commission’s triannual analysis of the EU’s 28 economies predicts that Irish gdp (gross domestic product) will grow by 4.5 per cent this year, before slowing to 3.5 per cent in 2017.

Following growth of 6.9 per cent in 2015, Ireland continues to be the fastest-growing economy in Europe. The projected growth rate of 4.5 per cent in 2016 leaves Ireland just ahead of Malta and Luxembourg in terms of gdp growth, with 1.8 per cent growth forecast in the euro zone’s largest economy, Germany, 1.3 per cent for France, and 2.1 per cent in Britain.

Ireland was one of the few EU economies to see its forecasts unchanged since November. Germany, France and Italy are all predicted to fare worse than forecast three months ago, due to a slowdown in China and volatility in world markets, despite the boost from low oil prices.

The European Commission expects Irish unemployment levels, which came in at 9.4 per cent in 2015 to continue to fall to 8.5 per cent this year and 7.8 per cent in 2017.

In its analysis of the Irish economy, the Commission said that Ireland’s economic fundamentals are “robust”, but it warns that the government debt ratio, though declining, “remains very high.”

It notes that Ireland is “particularly exposed” to possible deteriorations in the external environment which could dampen exports, while the economy remains vulnerable to interest rate moves and changes in the operations of multinationals.

While noting the unexpected increase in tax-take last year as the economy rebounded, it highlights the fact that two-thirds of that better-than-expected tax intake came from corporate tax.

Noting the “subdued rate of consumer inflation” last year, the Commission states that house prices and rents are forecast to grow at moderate rates, contained by the macro-prudential policies of the central bank and government plans to address supply shortages.

Overall, the Commission has trimmed its 2016 growth forecast for the 19 member euro area to 1.7 per cent, down from 1.8 per cent forecast in November, noting the slowdown in emerging economies.