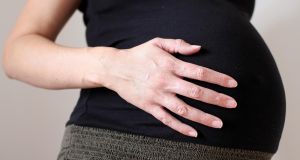 Ireland offers the second longest maternity leave in Europe but comes last in terms of pay entitlements, according to a new survey. Photograph: Katie Collins/PA Wire

Ireland offers the second longest maternity leave in Europe but comes last in terms of pay entitlements, according to a new survey.

According to the study, which covers 15 European countries and also the United States, Ireland comes second behind the United Kingdom in terms of total maternity leave allowed with mothers able to take 42 weeks out, 26 of which are paid. This compares with 52 weeks of total leave in the UK and a mandated minimum of just 14 weeks in Germany and Sweden. The US currently has no mandated paid maternity leave.

The research conducted on behalf of the careers website Glassdoor, reveals Ireland is the worst country in Europe overall for labour market benefits such as paid sick leave and unemployment cover.

While ranking highly in terms of maternity leave allowed, Ireland came in last place in terms of paid leave for new mothers. In Austria, Denmark, France, Germany, the Netherlands and Spain, new mothers get 100 per cent of their earnings during the time they are off, while much of the leave allowed here is unpaid.

Ireland, along with Austria, Germany, Switzerland and the US, ranked as the worst countries among those studied for paternity leave, with none offering mandated paternity leave. This situation is about to change in Ireland with at least two weeks of paid paternity leave becoming mandatory from September onwards. Finland was ranked the most generous country with 45 days being given to new fathers.

In terms of general parental leave, Ireland, along with Spain and the UK again performed badly with no entitlement to paid leave. Ireland and the UK currently offers 18 weeks of unpaid leave to each parent, compared with France and Germany, which offer 156 weeks.

Ireland was among the worst ranked countries in terms of annual leave and while not in last place came way behind most other European countries in terms of public holidays. Ireland also performed badly for unemployment benefits, coming in second behind the UK with a flat-rate entitlement of €188 per week for between 22 and 33 weeks, depending on contributions.

The study concluded Denmark, France and Spain provide the most generous overall labour market social benefits while Ireland, Switzerland and the UK provide the least.