Ireland is now back on a growth path, says ESRI 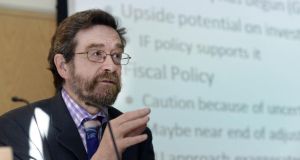 Prof John Fitzgerald at the ESRI’s quarterly economic commentary. He said house-building rates in the economy were now lower than at any time in the last three decades. Photograph: Brenda Fitzsimons/The Irish Times

Ireland’s economy will expand by 3.5 per cent this year, its fastest rate of growth in seven years, on the back of a resurgence in domestic demand and another strong performance in exports, the Economic and Social Research Institute (ESRI) has said.

However, the economic think tank warned the shortfall in housing, most notably in Dublin and Cork, was resulting in “unnecessary” pressure on prices, which could restrain recovery if allowed to persist.

Last week, Minister for Finance Michael Noonan downplayed concerns about another property price bubble, but indicated the Government would use the State property agency, Nama, to tackle the emerging housing shortage.

In its latest quarterly commentary, the ESRI delivered its most upbeat assessment of the economy since the crash, saying it was now recovering “quite vigorously”. A noticeable pick-up in domestic demand, the first since the financial crisis began, combined with strong export growth, was cementing recovery across several sectors, it said.

The ESRI predicted gross national product (GNP), which strips out the effects of multinational profit flows, would grow by 3.5 per cent this year, and by 3.7 per cent in 2015, rates of growth not seen since 2006.

It said gross domestic product (GDP), the more traditional measure of economic growth, would expand by 2.6 per cent this year, and by 3.5 per cent next year.

Distorted
However, it cautioned that GDP was being heavily distorted by the expiry of patents in the pharmaceutical sector and by changes to turnover in the IT sector related to shifting royalty payments.

The institute predicted employment growth would accelerate to 2.7 per cent this year, a rate that would see the creation of about 50,000 new jobs.

It said the labour market still provided the “most reliable indicator” of activity in the Irish economy.

The ESRI predicted the Government’s budget deficit would come in below the troika-agreed target of 3 per cent of GDP in 2015, even without “the substantial further cuts envisaged for Budget 2015”.

“After a long period of attrition, we are approaching the end of the very painful period of fiscal adjustment,” it said.

The ESRI’s budgetary predictions are likely to increase the clamour for tax cuts in the forthcoming budget. However, it warned there still remained the possibility of new and unforeseen shocks to the economy, and therefore it advocated “erring on the side of caution” to ensure budgetary targets were met in 2015.


House-building rates
Lead author Prof John FitzGerald said house-building rates in the economy were now lower than at any time in the last three decades, and this was causing a marked build-up of pressure in the housing market.

“Demand for accommodation in the Dublin area is now running ahead of supply and, until supply responds, this will put upward pressure on rents and prices.”

If immediate measures to increase supply were not adopted, the shortfall could undermine recovery as higher house prices and rents made it more expensive for people to live and work in the economy.