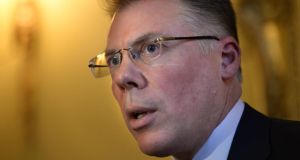 Craig Beaumont, head of the IMF’s mission to Ireland, said the strength of GDPgrowth had surprised most observers and was ahead of his organisation’s projection. Photograph: Dara Mac Dónaill

The International Monetary Fund has queried the strength of Ireland’s economic growth, suggesting it is being exaggerated by offshore manufacturing conducted on behalf of multinationals in the pharma sector.

The head of the IMF’s mission to Ireland, Craig Beaumont, said the strength of Irish gross domestic product growth, expected to come in at about 5 per cent for 2014, had surprised most observers. He noted it was considerably ahead of the IMF’s own projection of 2 per cent.

However, he said the better-than-expected performance was being driven by exports and, in particular, an “exceptionally strong” upsurge in activity from a small number of companies in the pharma sector. “Once you exclude that item, growth would be a little bit closer to our projections, we don’t have a precise estimate, but maybe in the 3-4 percentage point range.”

This is not the first time Ireland’s recent growth spurt has been questioned. The Government’s own fiscal advisory council last year warned that offshore activity known as “contract manufacturing”, a common practice in the pharma industry, was distorting the State’s GDP metric. Ireland’s pharma exports are worth about €40 billion to the economy, a substantial portion of overall GDP, but the sector only employs 37,000 people.

Despite his caveat, Mr Beaumont, who was speaking after the publication of the IMF's second post-bailout report on Ireland, said the Irish economy was “doing well”, noting recovery was being led by an upswing in investment on the demand side, which would lead to further job creation.

The IMF’s report said the troika’s programme enjoyed a high level of implementation, which ultimately “stabilised the economy”, despite the persistence of weak domestic demand and high unemployment in initial phases.

“The external sector provided a much stronger than expected impulse initially, as Ireland’s export exposure – 40 per cent to the US and the UK – and product specialisation sheltered it from the slowdown in the euro area,” it said.

However, export growth was lower than expected in the later phase of the programme due to the patent cliff in the pharmaceutical sector.

The contraction in domestic demand lasted longer than in other advanced economies, it said, because of a deterioration in Government, corporate and banking balance sheets in 2012.