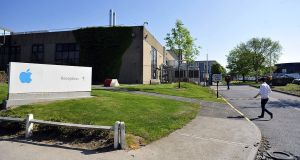 Apple’s Cork campus. The Apple tax ruling marks a new front in the EU’s battle against tax avoidance and presents a challenge to transatlantic relations.

As EU competition commissioner Margrethe Vestager took to the stage at the European Commission in Brussels just after midday it quickly became apparent that the final figure in the Apple case was well in excess of what even the most pessimistic Irish officials had expected.

While an adverse finding against Ireland had never really been in doubt, the figure of € 13 billion took even seasoned competition experts by surprise.

The ruling marks a new front in the EU’s battle against tax avoidance and presents a challenge to transatlantic relations. It is also a potential watershed moment for EU competition law.

The recent probes into Fiat, Amazon, Starbucks and Apple have seen the Commission’s competition division move away from its traditional territory of mergers, acquisitions and state aid to tackle the fiendishly complex world of corporate tax.

While technically the commission did look at the state aid implications of tax regimes when it took Italy to task in the early 1990s, the recent cases against mostly US multinationals are on a much larger scale.

The Irish government and Apple are set to launch legal appeals. The cases are likely to go before both the General Court and European Court of Justice, a process that could take five to six years. Competition experts and corporate lawyers will be closely watching the outcome of the case to ascertain its impact on the future of corporate taxation.

As well as the sheer size of the figure unveiled by Vestgaer, officials were caught offguard on the substance of the case.

While the initial preliminary finding two years ago focused on the specific tax agreements revealed in minutes from meetings between Apple and Revenue officials in 1990 and1991 – including a suggestion that Ireland promised a good deal for Apple in exchange for employment guarantees – this did not form the basis of Tuesday’s finding. While the Commission has not rowed back from this analysis, it does not form part of its investigation.

The European Commission’s case set out on Tuesday is built around the activity of two companies – Apple Operations Europe (AOE) and Apple Sales International (ASI), subsidiaries of the US-based Apple Inc.

Both companies were incorporated in Ireland and were permitted to record profits in Ireland – in essence they were examples of the ‘Double Irish’ structures.

Crucially, both companies were constituted of two parts - a Head Office and an Irish branch. While the Irish branch had employees, the Head Office was a corporate entity with “no employees, no premises and no real activities,” to quote Ms Vestager.

Its sole activity, according to the commission, was board meetings which took place up to five or six times a year, usually over the phone, during which cash management, dividends and other financial issues were discussed. It was a so-called ‘stateless’ company.

The crux of the European Commission’s case against Ireland is that the vast majority of Apple’s profits were allocated to the Head Office part of the companies rather than the Irish branch, thereby avoiding tax.

They have cited the example of 2011 - the year discussed during the US senate hearings that prompted the EU’s investigation. During that year, ASI made a profit of €16 billion, but only €50 million of this was allocated to the Irish branch. The remainder was allocated to the so-called ‘Head Office’ where it remained untaxed. According to Ms Vestager, Apple’s effective tax rate in 2011 was 0.05 per cent.

“To put that in perspective, it means that for every million euros in profit, it paid just €500 in tax,” she declared on Tuesday.

By multiplying the commission’s estimate of the proper taxable profit – ie, the liability that would have been applicable if the profits had been allocated to the Irish branch of both companies - by Ireland’s corporate tax rate, the Commission has alighted on the figure of € 13 billion plus interest. This estimate also takes into account the not insignificant contributions both AOE and ASI made to Apple Inc for research and development (R & D) activity.

There are two ways Apple’s € 13 billion-plus repayment bill could be reduced according to the commission. The IRS, the US tax agency, could rule that the amount of R & D contributions Apple received from both subsidiaries should have been higher.

This would reduce the amount payable to Ireland and increase US tax revenue.Alternatively, other EU countries could conclude that Apple should have recorded its sales in their countries instead of Ireland, and insist that Apple paid more tax locally, again reducing the company’s exposure to Ireland. Neither outcome appears likely.

Ms Vestager said on Tuesday that the commission had concluded that the splitting of Apple’s profits between the two parts of the AOE and ASI companies “did not have any factual or economic justification.”

In short, the commission has concluded that Ireland gave illegal state aid to Apple, in breach of EU law.

It will now fall to lawyers for the accused to contest this.

The refrain from Government circles has long been that the EU may not have liked the tax structures that were in place at the time when the Apple deal was struck but that does not mean that they were illegal.

It may be some years before a definitive answer on this question will be reached.