Hiring slows at British firms ahead of Brexit vote in June 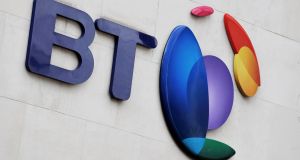 Mike Rake, chairman of BT, said there is concern among business leaders of a potential Brexit and “without any doubt this is causing sentiment to change”. Photograph: Nick Ansell/PA Wire

Uncertainty over the outcome of Britain’s EU referendum is having a chilling effect on business activity in Britain, with companies pulling back on hiring and investment across sectors from real estate to recruitment.

The slowdown is hitting property prices at the high end of the London property market and hiring in financial services last month fell 21 per cent against last year.

“[Brexit fears are] having a huge impact on general confidence,” said Lord Mervyn Davies, who chairs several British private equity companies. “What is scary for foreign direct investors, and investors generally, is the fear of the unknown.”

Ian Taylor, the chief executive of Vitol, the world’s biggest independent oil trader, said last week that business was being put on hold. “There is no doubt about it. Look at the numbers. They are already coming down quite severely.”

Global intervention to support the economic argument that Britain would be worse off outside the EU has been gathering pace in the past week after the IMF said Brexit would wreak “severe damage” on the British and European economies.

The London property market is already showing signs of a “Brexit effect”, according to construction and property consultancy McBains Cooper. “Investors are telling us that they are being adversely affected by the risk of Brexit,” said Michael Thirkettle, chief executive.

The uncertainty is also affecting foreign investors. In a survey of 370 European companies recently conducted by the European Business Awards, more than a fifth said that a potential UK exit from the EU was discouraging them from investing in the country, with German companies particularly pessimistic about the outlook.

The real estate arm of Union Investment, the German investment company, said it had delayed buying an office building in the City of London because of the risk of Brexit.

“We don’t want to take any higher risk in this situation,” the company said. – (Copyright The Financial Times Ltd 2016)