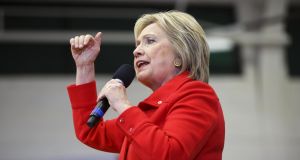 US presidential hopeful Hillary Clinton has hardened her criticism of the latest Irish-based “corporate inversion” of a US firm for relocating its legal tax home, calling the practice a “perversion.”

On the campaign trail in the first voting state of Iowa, Mrs Clinton has been angrily condemning the $16 billion (€14.7 billion) merger of Johnson Controls, a US maker of car batteries, and Cork-based Tyco International.

The American firm is the latest to merge with an Irish company and switch headquarters for tax purposes to Ireland to avail of the Irish 12.5 per cent rate and avoid the American 35 per cent rate.

Addressing a rally in Davenport on Friday night, the Democratic front-runner said she gets “worked up about” inversions and told the large crowd about one deal that “should infuriate you”.

The candidate did not mention Ireland by name but her campaign did last week, criticising the two companies for “moving abroad to Ireland to shirk its US tax obligations”.

“They’re going to pretend to sell themselves to a European company so they can pretend to move their headquarters to Europe so they can actually avoid paying taxes,” she said, drawing boos from the crowd.

“Here is a company that we helped to save, and they are turning their back on the country in which they became successful and the country that saved their business in order to avoid supporting that country.

“That is wrong. They call it inversion; it’s a perversion.”

“In America today we are losing $100 billion in revenue every single year because large corporations are stashing their profits in the Cayman Islands and other offshore tax havens,” he said.

Mr Sanders didn’t name Ireland but identified companies such as pharmaceutical giant Pfizer which operates Irish businesses and was recently involved in a corporate inversion with Dublin-based Allergan.

Republicans have been raising the issue on the election trail but have taken a different tack, criticising a broken American tax system and arguing that higher tax rates in the United States were encouraging companies to move overseas.