Greece’s finance minister wants to default and stay in euro 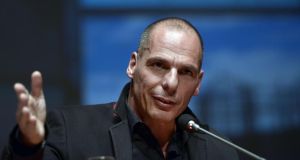 Economist and new Greek finance minister Yannis Varoufakis: “It takes a degree of silliness, which is unprecedented to believe that you can talk about Grexit and then contain the after effects, as if this is something which can be done in an orderly way.”

It’s no secret what Yanis Varoufakis thinks Greece should do with its debt.

The economics professor at the University of Athens, who announced his appointment as the country’s finance minister in a posting on his personal blog on Tuesday, has been arguing since the beginning of the crisis that Greece should default while staying a member of the euro area.

As well as on his website, Mr Varoufakis shares his opinions with 128,000 Twitter followers. Greece should have never joined the euro area, but now that it’s in, a departure would be like falling from a cliff, he said.

“The last line in Hotel California explains where we are: you can check out any time, but you can never leave,” he back in 2012.

Now he gets to take demands for a radically different approach to Greece to European capitals as the new government in Athens tries to implement its pre-election pledges.

Rewrite agreements At the core of them is to rewrite the agreements with the euro area and the International Monetary Fund for the country’s €240 billion financial rescue program, though Syriza’s official party line is not to default.

“The problem with the bailout is that it wasn’t really a bailout,” Mr Varoufakis, 53, said . “It was an extend and pretend, it was a vicious cycle, a debt-deflationary trap, which not only destroyed our social economy but also showed that the cost of our so-called bailout for the average German, the average Italian, the average Slovak was maximized.”

Greek stocks and bonds tumbled before the cabinet was officially named on Tuesday. Alpha Bank fell as much as 19 per cent, while the yield on three-year government bonds surged almost two percentage points to 13.9 per cent.

Also a visiting professor at the University of Texas in Austin, where prime minister Alexis Tsipras pledged allegiance to the euro in a November 2013 speech, Mr Varoufakis is a career academic.

He started as a teaching and research assistant at the University of Essex in England, where he earned his doctorate. One of his research interests is game theory, and he later worked as a consultant for a video game company.

When it comes to politics, Mr Varoufakis was an adviser to former prime minister George Papandreou before the Pasok leader assumed power and took Greece into its bailout in 2010.

A staunch opponent of spending cuts and tax increases and an advocate of a “haircut” on Greek public debt, he is a relative newcomer to Syriza.

Election promises In 2012, he urged readers of his blog to vote for the party, while also telling them its manifesto was “not worth the paper it is written on.”

“Just ignore it,” he wrote on June 3rd, between the two elections in six weeks that propelled Syriza into the international spotlight that year. “While replete with good intentions, it is short on detail, full of promises that cannot, and will not be fulfilled,” he continued, adding that “the greatest one is that austerity will be canceled.”

Spin forward two and a half years and he ended up getting more votes than any other candidate in last Sunday’s election. Like Mr Tsipras, Varoufakis also says that Syriza’s opposition to austerity and vows for debt relief won’t lead Greece out of the euro, known as “Grexit,” because the cost for region would be too much to bear.

Greece already executed the largest writedown of debt in history. “It takes a degree of silliness, which is unprecedented to believe that you can talk about Grexit and then contain the after effects, as if this is something which can be done in an orderly way,” Mr Varoufakis said in Janaury.

As well as his blog, Mr Varoufakis has Twitter followers including economist Nouriel Roubini and David Blanchflower, a former member of the Bank of England’s monetary policy committee now in the US.

In a post dated January 27th, Mr Varoufakis said he would continue to air his views, albeit less frequently. “The time to put up or shut up has, I have been told, arrived,” he wrote. “My plan is to defy such advice.”