Opinion: ‘It is not so much a case of dividing up the budget cake, more one of slicing up a small muffin’ 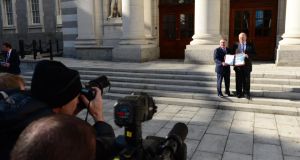 As one budget insider admitted this week: “We just aren’t used to it.” After years of cuts and tax hikes – and budget homework being corrected by the troika – suddenly the Government finds itself with choices to make. Perhaps this unfamiliar position explains the extraordinarily confused messages which we have heard from Ministers over the last few months, not to mention the Punch and Judy style debate from interest groups straining to get a share of the very limited pie. A lot of these demands are completely unrealistic, given the amount of cash available. Make no mistake, it is not so much a case of dividing up the budget cake, more one of slicing up a small muffin.

That said, the surge in growth has come just in time for budget day. We now know from the pre-budget figures just published that, while still modest, the scope for including a few goodies is a bit more than most had reckoned up to very recently. Ministers Noonan and Howlin will be able to give away a bit more than they take.

The tax package will offer a little to a lot of people. The three- year plan for tax and spending being published with the Budget will promise more to come. Ideally the plan would be the first real attempt at setting a post-crisis medium-term direction for the economy. But it will more likely be a two-year plan in disguise, promising that, after the delivery of a bit in this Budget, more will come next year, the last possible budget before the next general election.

Over the years, budgets have fallen into one of two patterns. For the “giveaway” budgets of the 1990s boom-time, the government trick was always to play down the expectations of the public, in the hope that people would then be suitably pleased by what was actually delivered. In the subsequent cutback era, the approach was the opposite – try to frighten the life out of people beforehand, with the intention that they would shrug their shoulders when the details were announced, thinking that it could have been worse.

This year it had all been turned on its head. None of us will be significantly better off after next Tuesday, but still all the pre-publicity for months now was about “giving something back” to the public. Only in the last few weeks have Ministers tried to rein things in by talking of a neutral package. The good news from the pre-budget figures is that there is bit more leeway. But still, for most households, any largesse will probably only offset the extra burden of water charges.

Of course it’s all about the politics. The two budget Ministers will sell one big “good news” item each.Michael Noonan will have the income tax goodies. Spending Minister Brendan Howlin will have some positive news in a major social housing programme. In terms of what it can deliver in 2015, the budget will thus have a bit of substance, but will be a lot more about style – sending a message the recession is over and that we are heading towards a bright new future.

This is where the three-year plan comes in. In an ideal world it would set out a framework for the next few years, the planned levels of tax and spending and priorities within this. In reality it may be more a device to get the Government off the hook of any disappointment about the modest cash benefits to taxpayers next Tuesday by offering “jam tomorrow” – or more precisely in exactly a year’s time when the next budget is delivered.

When you don’t have a lot of cash it is all about priorities – and how they are set. This Government - and whatever administration comes after it - now faces a huge challenge as we move out of austerity, but not back into a time of plenty. Not by a long way. By sending out messages all summer that we could now afford to give something “back”, the Government has set itself up for a whole host of demands. Ministers may have a bit of leeway, but we are still entering an era of tight spending control and commitments to keep borrowing falling. Neutral budgets, or something like them, are the new normal.

Despite this, the lobbying will ramp up as the election comes into view. Consider just some of what the Government is already facing. Business groups say foreign executives will flee the country if the top rate is not cut. Social lobbyists say the “fat cats” should pay even more and money should go on spending priorities. Public sector unions want their pay cuts back – and have been promised a hearing . Demands are rising for more spending across the board. Figures and “evidence” are being thrown around like confetti in these debates, but the wider context is ignored.

The three-year plan would, ideally, look at how we will run our national finances as we return to more normal times, informed by the fact that we still have a high debt and that borrowing more just adds to it. It would prioritise eliminating borrowing and getting the debt burden down quickly. It would be a device to meet much of the lobbying with a dose of reality.

This Government and the last one took many tough decisions. We had expected, up to recently, to have one last difficult budget next week. Instead, an extraordinary surge in growth has got them – and us – off the hook. The €2 billion in cuts demanded by the European Commission and IMF are no longer necessary. But we still remain a small, highly indebted state currently borrowing money on international markets at a rate which will not continue in the long term.

The debate about the budget has paid little enough heed to this backdrop. In the heat of the austerity battle, nobody gave a lot of thought to what happens next. Part of the job of Ministers Noonan and Howlin – and the Government’s three-year plan – should be to make clear that while austerity may have ended, we are never going back to the days of big budget giveaways. With a general election likely late next year or early the year after, I wouldn’t bet on them trying to sell this particular message too hard next Tuesday. Cliff Taylor’s column will appear every Saturday