Goods made abroad by Irish firms not significant in 2014 growth, says CSO 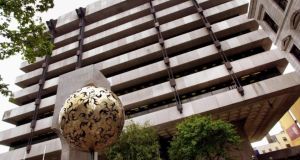 Questions regarding goods made abroad have surfaced in reports from the Central Bank of Ireland. Photograph: Matt Kavanagh

As recovery picked up last year, an assortment of Irish and international agencies raised concern that the underlying strength of the Irish economy was less than signalled in the rapid growth rate as a result of contract manufacturing.

At issue is the production of goods that never actually pass through the State en route to end purchasers, but which is still reflected in Irish GDP.

The question has surfaced in reports from the Central Bank of Ireland, the IMF and the European Commission.

Although the Irish Fiscal Advisory Council suggested the adjustment to 2014 trade data may have been in the order of 2.5 per cent of GDP, the CSO said in a technical note that considerable comment had attributed “undue significance” to the matter.

“In the case of the additional products made under contract manufacturing arrangements for Irish companies in 2014, the related addition to added valued over and above wages and salaries paid is not particularly significant in explaining the recent growth in Irish GDP (+4.8 per cent in 2014),” the note said.

Contract manufacturing occurs where an Irish firm engages another abroad to make either new products or products the Irish entity formerly made.