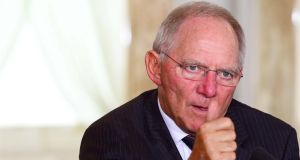 Wolfgang Schäuble: is critical that many EU members continue to ignore budget and reform recommendations from Brussels. Photograph: Eric Luke

A year after Ireland waved goodbye to the troika, Germany has suggested the European Commission should adopt troika methods to name and shame EU governments into meeting their reform obligations.

In a joint paper, German finance minister Wolfgang Schäuble and economics minister Sigmar Gabriel suggest the EU-International Monetary Fund troika system – regular visits to capitals to maintain reform pressure, in private meetings and via the media – would be an effective way of bringing around recalcitrant reformers.

“In future it will be of considerable importance to increase the will for fiscal consolidation and [greater] competitiveness in all member states,” the two ministers write in their report, sent last week to the new European Commission, the Eurogroup and the Italian presidency of the European Council.

Noting the “limited success” of this method – an obvious nod in the direction of Paris and Rome – the two German politicians suggest it is time to get out the political thumbscrews.

Step one: oblige all member states to appoint high-ranking, dedicated officials to ensure that reform recommendations are not dealt with by lowly civil servants with no political clout.

“In future the contacts and consultations should take place increasingly via the capitals, bringing in experts and decision-makers up to and including ministers,” they write. The German paper suggests the troika method used in Athens and Dublin could be used to “attract the attention of the broader public and exercise group pressure” on governments to meet, rather than ignore or dispute, their budget and reform commitments.

Step three: rather than a long shopping list of outstanding reforms, the German paper suggests the troika-lite makes clear, focused demands: “A low number of recommendations that concentrate on the important challenges would bring about greater attention in the discussion in the member state.”

Step four: rather than allow member states kick reform cans down the road – again, Paris and Rome are not mentioned but clearly on Berlin’s mind – binding deadlines to meet reform goals should be named by the visitors from Brussels. “This increases pressure on the member states to implement urgent measures,” the report adds.

Should a member state not stick to the agreed reform line, Dr Schäuble and Mr Gabriel suggest the commission should cut off EU funds, such as from structural and investment programmes.

For Der Spiegel, which prints extracts of the report, the Schäuble-Gabriel paper marks Berlin’s belated return to the so-called community method – doing EU business via the commission – after crisis years of agreeing policy via EU capitals, the so-called intergovernmental method.

On a visit to Dublin on Friday, Dr Schäuble said it was urgent for leaders to “figure out possible options to get Europe more integrated” and that, if necessary, he would back EU treaty change.

According to Der Spiegel, EU reform was on Dr Schäuble’s mind during a recent finance ministry conference for diplomats and economists.

In remarks to his audience, the finance minister reminded them of the benefits and innovations a closer economic union would bring: a continent-wide EU unemployment benefit or even jointly issued EU sovereign debt, so-called eurobonds.