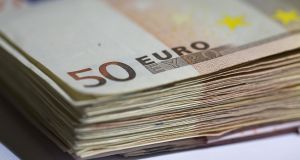 Growth in Germany’s private sector was slower but still robust in January, a survey showed on Wednesday, suggesting Europe’s largest economy remained on a solid footing at the start of 2016 despite global growth fears.

Markit’s final composite Purchasing Managers’ Index, which tracks activity in the manufacturing and services sectors that together account for more than two-thirds of the German economy, stood at 54.5 in January, down from 55.5 the previous month.

That well above the 50 line that separates expansion from contraction for the 33rd month running but marked the slowest rate of growth since October.

Service sector output increased at a weaker rate than in December as new business came in at a slightly slower pace, though incoming new orders remained at a high level historically. Business expectations were at their highest level in almost five years.

“Although output rose to the smallest extent in three months, the underlying rate of growth was robust overall, helped by a further sharp rise in new business,” he added.

Around one in three participants expected output to rise over the coming year and some said cheaper oil, plans to expand and beefed-up investment programmes would likely translate into stronger activity.