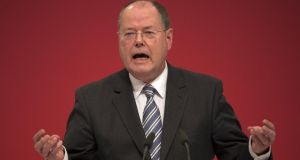 Peer Steinbrueck: both he and his Social Democratic Party have been particularly vocal critics of Ireland’s tax laws. Photograph: Johannes Eisele/AFP/Getty Images

Mr Steinbrück – an unsuccessful candidate in the recent German election – and his Social Democratic Party (SPD) have been particularly vocal critics of Ireland’s tax laws.

He used the recent election campaign to attack failed finance market alchemy and condemn “tax oases” such as Ireland and the Netherlands.

According to this morning’s Der Spiegel magazine, Berlin began doing business in Ireland to tap into pension funds of Germany’s post office, which was privatised and broken up in 1995 into three companies for telecoms, post and post office bank.


At the time of the privatisation, the German federal government agreed to shoulder the

companies’ existing looming pension obligations while the three newly privatised companies were obliged to pay some €20 billion until 2042.

This deal was forgotten for a decade until 2005, when Mr Steinbrück’s predecessor as finance minister, SPD man Hans Eichel, struggled to reduce Germany’s deficit below the prescribed EU ceiling of 3 per cent of gross domestic product.

Investment bankers hired by Berlin identified the future income to the pension fund from the privatised companies as an asset and recommended selling it off – a process known as securitisation – through an Irish letter box firm.


The company was set up, the asset sold and Berlin used some €8 billion earned to replace its own pensions contribution from 2005 to 2007.

Its hope of reducing its outgoings – and deficit – fell foul of the European Commission. Brussels ruled the deal had moved, but not reduced, Berlin’s own liabilities to the postal pension fund.

Germany’s federal court of auditors was similarly critical, accusing Berlin of creative accounting to “push liabilities into the future”.

The juggling failed to reduce Berlin’s deficit, though the advising investment bankers still earned €83 million on the deal.


Despite this, Mr Eichel’s successor, Mr Steinbrück, continued the practice – covering the state’s pension liabilities with securitised pension obligations. To save taxes on the transactions, Berlin set up further companies in Ireland, named German Postal Pensions Securitisation 1 and 2.

With the securitisation income now paid up-front, Berlin now has to shoulder – alone – the remaining cost of 275,000 pensioners.

Worse, the pension fund members were told that some €2.8 billion in income from the Irish-based companies was invested in special-purpose vehicles including those of Dexia, the failed Belgian-French bank nationalised in 2011 with €90 billion of public money.

The SPD’s use of Irish firms to juggle pensions payments and save taxes could be an interesting point of discussion when Tánaiste Eamon Gilmore visits Berlin this week.

“If Germany is making available its creditworthiness to others, we expect others to improve their own revenue base,” said Mr Steinbrück.

1 Should my mam wait for house prices to drop before buying?
2 Cheers: Conor McGregor's whiskey races up the sales chart
3 Coronavirus: Big majority ‘uncomfortable’ returning to everyday activities
4 Ted Baker plans £95m cash call to survive crisis
5 Why we’re about to learn if we are really in the A-team
6 US ‘hard seltzer’ drink White Claw launches in Ireland
7 McCanns’ Balmoral sees property value hit from Covid-19
8 Dublin drops out of top 50 in ranking of best cities for start-ups
9 ‘I’m so lucky to be in the Caribbean – a million miles from Derry Girls’
10 Citigroup warns that markets are out of step with reality
Real news has value SUBSCRIBE