News will be welcomed in Ireland, which is seeking direct recapitalisation from the ESM fund 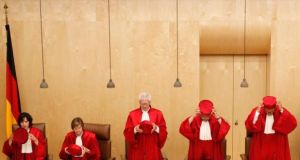 Germany’s Constitutional Court has confirmed the legality of the euro zone’s bailout fund, upholding a preliminary ruling from the height of the debt crisis in 2012 that gave an initial green light to the European Stability Mechanism (ESM).

The court reiterated that the €700 billion fund did not violate the rights of the Bundestag lower house of parliament to decide on budgetary matters as long as the lower house of parliament had sufficient oversight powers over the ESM. “The result is clear: the constitutional complaint...is inadmissible and on top of that unfounded,” said the president of the court, Andreas Vosskuhle, standing to read the verdict along with his red-robed colleagues in the courtroom.

“Despite the liabilities assumed, the budgetary autonomy of the German Bundestag is sufficiently safeguarded,” he told the court in Karlsruhe in south-western Germany.

There had been concerns expressed that a threat to the functioning of the fund would have had major ramifications, not just for the euro zone as a whole, but particularly for Ireland, which is seeking retrspective direct recapitalisation for AIB and Bank of Ireland from the fund.

ESM was limited to €190 billion , with any increase subject to approval or veto by the Bundestag.

The more than 35,000 plaintiffs included academics and lawmakers from chancellor Angela Merkel’s conservative bloc and the opposition, who argued that the ESM amounts to an illegal transfer of sovereignty from Berlin to Brussels.

The Constitutional Court has a history of delaying EU treaties to test their compatibility with German law, usually reaching the conclusion that parliament has to be consulted fully and taxpayers’ liabilities must be limited.

As expected,Mr Vosskuhle did not make any direct comments on the legality of the European Central Bank’s “unlimited” bond-buying scheme, the flagship emergency measure taken since the debt crisis began four years ago.

The German court took the unprecedented decision last month to defer a ruling on the ECB’s Outright Monetary Transactions (OMT) programme - which is credited with saving the euro zone - to the European Court of Justice in Strasbourg.