Geneva set to cut corporate tax rate by more than 10%

Swiss canton faces ‘mother of all battles’ over plan to cut tax rate to 13.49 per cent 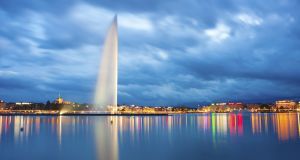 A rate of 13 per cent would leave Geneva with the third most attractive corporate tax system in Switzerland. Photograph: iStock

When the European Union pressured Switzerland to scrap tax breaks for foreign companies, Geneva had most to lose. Now, the canton that is home to almost 1,000 multinationals is set to use tax to burnish its appeal.

Geneva will on August 30th propose cutting its corporate tax rate to 13.49 per cent from 24.2 per cent, according to sources. For an interim period of five years, the rate will be a slightly higher 13.79 per cent, the sources said. While that’s 2.2 percentage points higher than the average preferential rate currently offered to many foreign firms, the new regime will improve the Swiss city’s competitive position, according to Credit Suisse Group.

“I could see Geneva going up very high in the ranks,” said Thierry Boitelle, a lawyer at Bonnard Lawson in the city.

“International companies will be glad to have some certainty when the new rate is finally implemented.”

Like the rest of Switzerland, Geneva has been buffeted by the strong Swiss franc and concern over immigration quotas, while the demise of banking secrecy has hurt the city’s financial industry. The stakes are high for the politicians contemplating a tax rate to underpin the French-speaking canton’s allure: multinationals from Procter and Gamble to commodity trader Mercuria Energy Group account for 76,000 jobs and 40 per cent of the economy.

“It’s the mother of all battles for us,” says Vincent Subilia, deputy director of international affairs and arbitration at the Geneva Chamber of Commerce, Industry and Services.

“We can’t afford to lose it because the attractiveness of Geneva and the shape that our economy will take for generations to come are at risk here.”

A rate of about 13 per cent would see Geneva jump 13 places to become the third-most attractive of Switzerland’s 26 cantons, trailing only Zug and Zurich, according to a study by Credit Suisse.

“Geneva and the western part of Switzerland will be even more attractive for firms, especially compared to France,” said Thomas Ruehl, head of regional research at Credit Suisse.

“We see the corporate tax reform as a big opportunity for Geneva.”

France, which borders the canton to the south, east and west, has a tax rate of 33.33 per cent, according to figures published by KPMG.

Within Europe, Geneva’s rate would exceed only a number of smaller economies such as our own 12.5 per cent and Montenegro, which has the region’s lowest rate of 9 per cent.

That will mean Geneva competes with Ireland, the Netherlands and the UK as a low-tax jurisdiction, while it may also provide Zurich with stiffer competition for Swiss corporates, said Mr Boitelle.

Still, tax alone won’t be enough to turn Geneva’s fortunes around, according to the lawyer, who highlights the need for Switzerland to resolve the issues caused by voters backing a referendum in 2014 to introduce quotas for EU migrants.

“Geneva’s appeal lies in a good business culture, plus quality of life, a well-educated workforce and stability. They need to come up with some kind of solution for the immigration issue.”

The new taxation regime will also leave a projected 459 million franc (€420 million) hole in Geneva’s finances, according to some estimates.

The shortfall is likely to be something close to that, said Roland Godel, a Geneva finance department spokesman, who declined to comment further on the reform before next week’s announcement.

“The real challenge will be on the budget side,” said Elias Hafner, an economist at UBS Group, adding that Geneva’s higher ratio of public officials to residents than other parts of Switzerland provided scope for cuts.That’s a concern for Romain de Sainte Marie, head of the Socialist Party in Geneva’s cantonal parliament.

“We need an attractive tax rate and we do want to retain most jobs in Geneva, but we must also guarantee the same level of public service,” said Mr de Sainte Marie.

“For Geneva’s attractiveness, the quality of public services is just as important as the corporate tax rate.”

Opposition to the new rate from left-leaning political parties will probably trigger a referendum as it would require only 500 signatures. In a March plebiscite in the neighbouring canton of Vaud, 87.1 per cent of voters backed cutting the corporate tax rate to 13.79 per cent from 21.65 per cent.

That change will probably mean fewer resources to spend on theatres, museums, street-cleaning and creches in the canton’s main city, Lausanne, according to municipal councillor Florence Germond.Failure to agree on a competitive tax rate in Geneva could result in an exodus of multinationals, cutting cantonal revenue by an even greater margin, said Denis Berdoz, a partner at Baker and McKenzie in Geneva, who specialises in tax and corporate law.

“They don’t really have a choice,” said Mr Berdoz.

“If the companies leave, the loss could be much higher.”