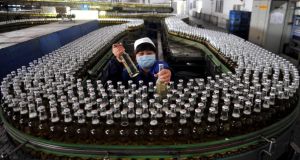 China’s August industrial production posted slightly better year on year growth at 6.1 per cent, but still below what markets were expecting. Photograph: Reuters

Boosting China’s flagging economic growth is a hot topic all around the country right now, from the mom’n’pop noodle shops in the countryside to the Western restaurants on the Bund in Shanghai.

Everyone expects the government do something about it, but is aware of how the growth situation is not as clear-cut as it was back in 2008 and 2009, when the government simply invested its way out of trouble.

Now the talk is again of government investment, but of a much smarter kind.

It was one of the standouts from talking to businesspeople on the sidelines during last week’s visit by Richard Bruton, Minister of Jobs, Enterprise and Innovation, to China and Hong Kong.

Some say that the crackdown on corruption has caused a seizing-up of the government investment side, as people are terrified about being accused of paying or receiving bribes, or facing censure for using traditional guanxi relationships to help oil the wheels in deals around the place.

There is increasingly the feeling that the negative impact of sluggish growth outweighs the need to keep the anti-corruption campaign, and while no one is suggesting that the anti-graft campaign is over, there is clearly going to be more of a focus in the world’s second largest economy on getting the economy growing again.

The pressure is there, evidenced by a 26 per cent increase in government spending jumped in August from a year earlier as Beijing tries to kick start growth.

“Greater policy efforts have been and still need to be made to intensify near-term investment support for the economy,” wrote Wang Tao and her team at UBS in Beijing.

“While we don’t expect any major new stimulus package, we do see the government continuing to intensify policy support to offset the recent swell in downward pressures in order to stabilise growth at 6.5 to 7 per cent. Efforts will continue to focus on mobilising resources to fund and implement government investment. We maintain our current GDP growth forecast of 6.8 per cent for this year.”

China is close to unveiling a new Five Year Plan development blueprint from 2016 to 2020, which will seek to energise growth without causing the massive debts incurred by the state stimulus plan in 2008 and 2009 when it last tried to energise economic growth here.

A lot of the headlines about the Five Year Plan will be about efforts to move away from traditional, polluting issues (which offers opportunities for Irish cleantech companies). However, the core message appears to be go to go for sustainable projects that make economic sense.

Traditional industries are in line for investment. The country’s top planning agency, the National Development and Reform Commission, approved about 800 billion yuan (€111 billion) of rail, port and road projects so far this year.

According to sources in the investment management industry, the focus is very much about ensuring that projects make financial sense.

For Ireland, the recent acquisition by a unit of the Chinese aviation and shipping conglomerate HNA of the Irish aircraft leasing firm Avolon Holdings for €2.2 billion is the kind of deal the government is interested in, the sources say. Good news for Ireland.

Currencies remain a complicating factor in this. The People’s Bank of China has been using forex reserves to support the yuan since last year, but there is more pressure on the currency since the devaluations last month.