Explainer: what is the Bilderberg Group? 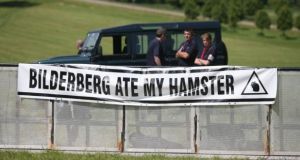 The news on Friday that Ryanair chief executive Michael O’Leary has been asked to join the storied Bilderberg conference prompts the obvious question: what is the Bilderberg group?

Named after the Dutch hotel in which its first meeting was held in 1954, it has long been the subject of conspiracy theories for providing a nexus between ultra-rich business figures and political leaders.

The group holds an annual meeting, usually in a luxurious hotel, and aspires to foster dialogue between Europe and North America.

It’s something of a cold war throwback – a gathering of dedicated Atlanticists discussing the big issues of the day. The founder was Prince Bernhard of the Netherlands and back in the 1950s, when Bernhard sent out the invitations, it was to discuss “a number of problems facing western civilization”.

These days, the Bilderberg Group prefers to call them “megatrends”. The megatrends on last year’s agenda includes: “What next for Europe?”, “Ukraine”, “Intelligence sharing” and “Does privacy exist?”

That’s an exquisite irony: the world’s most secretive conference discussing whether privacy exists.

The Bilderberg Group says its conference has no desired outcome. But for private equity giants, and the heads of banks, arms manufacturers and oil companies, there’s always a desired outcome.

Try telling the shareholders of Shell that there’s “no desired outcome” of their chairman and chief executive spending three days in conference with politicians and policy makers.

Try telling that to the lobbyists working hard to push the Transatlantic Trade Investment Partnership (TTIP) deal that is being negotiated.

Bilderberg is packed to the gills with senior members of powerful lobby groups.

British MP Michael Meacher describes Bilderberg as “the cabal of the rich and powerful” who are working “to consolidate and extend the grip of the markets”.

And they’re doing so “beyond the reach of the media or the public”. That said, every year, the press probes a little further behind the security fencing. Every year the questions for the politicians who attend, but remain silent, get harder.

They can try to laugh it off as a “talking shop” or a glorified knees-up, but these people haven’t come to Bilderberg to drink fizzy wine and pull party poppers. It’s possible that Reid Hoffman, the head of LinkedIn, turned up for the birthday cake. But I doubt it. This is big business. And big politics. And big lobbying.

This year the location for the 2015 conference is the Interalpen-Hotel Tyrol, a luxury hotel and conference centre in Austria and will be held in early June, although the exact date has yet to be confirmed.

Last year it met in Copenhagen in May and was attended by a powerful mix of ministers and moguls, billionaires and business behemoths.

Minister for Finance Michael Noonan was among the attendees in 2012. His British counterpart George Osborne has been attending on and off since 2006, though remarkably, in all this time, he hasn’t managed to say seven words about it in public.

His discretion is to be much admired. Or criticised. Depending upon your view of democracy.

General Philip M Breedlove, a four-star general in the United States Air Force, was another attendee in 2014.

It’s one thing to be told that Breedlove attends such meetings, and that he’ll be discussing global politics with foreign ministers and the head of Nato, three senior members of Goldman Sachs - and the chief executive of Airbus.

It’s quite another to see him in the flesh. He attended in uniform. With a military aide at his side. He came to do business, and his business is war.

This is why reporters and concerned citizens from around the world come to Bilderberg each year: to bear witness to the reality of it.

A few years ago you were scoffed at as a nutcase if you talked at all about this meeting. You might as well have been trying to describe a conference of unicorns taking place in Narnia.

“Pop on your tinfoil hat and run along now …” - but that rhetoric doesn’t hold much water any more.

When you see a jetlagged Craig Mundie of Microsoft, a member of the Bilderberg steering committee, unloading his luggage in front of a luxury hotel, the reality of the meeting is no longer in question.

When you know that after Mr Mundie has had a couple of hours’ sleep and a hot stone massage, he’ll be discussing “Does privacy exist?” with the head of MI6 and the chancellor of the exchequer, that’s when the rhetoric changes. And that’s when the mainstream press start showing up.

Henry is an expert on China, and Klaus Kleinfeld is on the board of the US-China business council, so both of them will have lots to discuss with Cheng Li of the Brookings Institute, an expert on “technological development in China” according to his Brookings bio.

No doubt he’ll be taking part in the scheduled discussion about “China’s political and economic outlook”.

Usually at Bilderberg a sketchy agenda is released a few days before the conference, along with a participant list.

We await with interest.