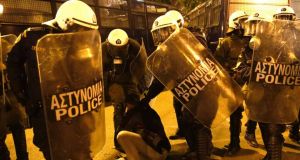 A top Greek court has struck down wage cuts imposed by the government in 2012 on police and armed forces to comply with the terms of the country’s EU-IMF bailout, court and government officials said today.

The ruling by the Council of State, Greece’s highest administrative court, could blow a hole of as much as €500 million in the country’s finances, a senior finance ministry official warned, further complicating already stalled talks with international lenders to release more rescue loans.

Its ruling that a 10 per cent wage cut for policemen and soldiers applied in 2012 was unconstitutional has not been made public but was confirmed by court and government officials after it was leaked to local media.

“They are a core part of the state and therefore deserve special protection,” a senior court official told Reuters on condition of anonymity.

Portugal’s constitutional court has also rejected austerity measures agreed by the government under its bailout.

1 ‘Saudi Arabia is where the opportunities will happen in future’
2 MSD buys Takeda biologics plant in Dunboyne
3 State’s biggest landlord records 30% rise in rental income
4 Wirecard was looted before collapse, German prosecutors suspect
5 Irish tourism must also help itself to survive the pandemic
6 Scars from the crash give Irish banks 2.6 billion reasons for Covid caution
7 Refurbished Cafe en Seine doubled sales to €9.5m before pandemic
8 Identigen founders make €12m each from sale of company
9 Facebook agrees Irish wind-farm deal with Brookfield in Tipperary
10 What will the office market look like after the great remote working experiment?
Real news has value SUBSCRIBE