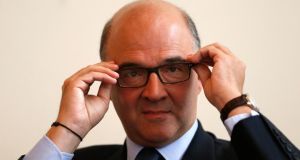 French finance minister Pierre Moscovici adjusts his glasses during a news conference on the 2014 budget at the Economy ministry in Paris. Photograph: Charles Platiau/Reuters.

French finance minister Pierre Moscovici has said the pace of economic reform can not be accelerated, as he fended off criticism the country was relying on external factors to generate growth.

Mr Moscovici also said that a reform of the indebted pension system, due to be presented to cabinet on September 18th, was sustainable despite criticism the Socialist government had left structural problems in the system untouched.

“I am in constant dialogue with the [European] Commission, with Commissioner [Olli] Rehn and all the Commission, I explained to them that we cannot do more, that we are going really at a very fast speed in order to reform our country,” he told CNBC in an interview.

Earlier this week, France cut its economic growth forecast for 2014 and pushed back a deficit-reduction target, acknowledging it would take advantage of an extra two years granted by the EU to put its finances back on track.

Mr Rehn, commissioner for economic and monetary affairs, said this week the pension reform - which will lengthen working lives to 43 years from 41.5 currently, starting in 2020 - went in the right direction, but must not raise labour costs.

Mr Moscovici said the government was committed to structural reform, citing a January overhaul of rigid labour rules, and the French economy was in line for “strong, solid and long-lasting” recovery.

“...We are acting for the internal economy; that’s why I want the cost of labour to be diminished,” he said.