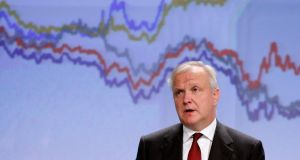 EU economic and monetary affairs commissioner Olli Rehn: he suggested an inquiry could help end a long-running dialogue between Germany and its critics. Photograph: Reuters/Francois Lenoir

The battle over Berlin’s record trade surplus moved up a gear today as the European Commission decided to prepare an in-depth analysis of Germany’s persistently high current account surplus to find out if it is a sign of a serious imbalance in Europe’s biggest economy.

New EU rules, demanded by Berlin and others as a response to the euro crisis allow Brussels to launch in-depth review of any member state flagged as showing competitiveness problems or macroeconomic imbalances.

Germany now faces a so-called macroeconomic imbalance procedure, in which the commission probes economic data and can even demand action where the current account surplus exceeds 6 per cent of gross domestic product (GDP) over three years. Failure to implement commission recommendations could end with the commission imposing a fine of 0.1 per cent of GDP.

The EU will recommend steps to fix the problem if the review, due to be finished early next year, finds the surplus is harmful.

“A high surplus does not necessarily mean that there is an imbalance,” European Commission President Jose Manuel Barroso told a news conference. “We do need to examine this further and understand whether a high surplus in Germany is something affecting the functioning of the European economy as a whole.”

High-wire act
Launching an investigation into Europe’s largest member state could prove a high-wire act for the Brussels executive, plunging it into a highly-politicised economic blame game for the euro-zone crisis.

Germany’s critics say that its consistent current account surplus – exporting more goods and services than it imports – has been a key factor in the euro-zone crisis. The single currency has given German manufacturers a competitive advantage, they argue, allowing them steal a march on many euro-area competitors. The combined profits and private savings of cautious German consumers, the critics argue, flowed through the euro banking system as investment capital to the periphery and, in the case of Ireland, helped inflate the property bubble.

Berlin consistently dismisses these criticisms, saying it should not be punished for the competitiveness of its globalised exporters.

Of late Berlin has adopted a more differentiated tone: acknowledging imbalances in the past while insisting that Germany’s biggest export growth markets are now outside Europe. German exports to the euro zone dropped from 4.4 per cent in 2007 to 2.2 per cent last year.

European commissioner for economic and monetary affairs, Olli Rehn yesterday suggested an inquiry could help end a long-running dialogue between Germany and its critics who “simplify a complex reality in a way that kills any serious policy debate”.Any review of Germany would be open-ended, he insisted, and focused on removing “bottlenecks for demand growth”.

The long-simmering row over Germany’s excess of exports over imports burst into the open last week when the US accused Germany of pursuing economic profit at the expense of its euro-area partners.

Record trade surplus
Economic data released last week added to the debate, showing Germany’s trade surplus hit a new record in September. The seasonally adjusted trade surplus widened to €18.8 billion in September while the current account surplus was up 8 per cent year-on-year to €19.7 billion – well above the 6 per cent threshold considered excessive in the EU.

Mr Rehn pointed out yesterday that Germany’s export surplus has exceeded 6 per cent every year since 2007.

Berlin is expected to launch an energetic defence, pointing to rising domestic demand and a recent IMF analysis arguing that its trade surplus, forecast to drop below 6 per cent next year, is not the result of political failings in Berlin.