Deputies in Athens are expected to back the third bailout after long, acrimonious debate 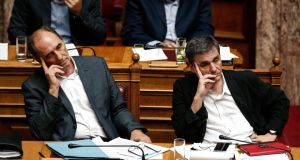 Euro zone finance ministers will convene on Friday in an extraordinary session to deliberate on the terms of the recently agreed Greek bailout after deputies in Athens were due to approve the package after a long, divisive parliamentary debate that is almost certain to result in a split in the ruling left-wing Syriza party.

Debate in Athens on the bailout package, worth some €85 billion over three years in return for major fiscal and economic reforms, began early yesterday at committee stage but only reached the main chamber of the house, which had to be recalled from its summer recess, close to midnight, meaning deputies were not expected to vote until the early hours.

As the coalition government of prime minister Alexis Tsipras was expected to see the 384-page Bill through with the help of three mainstream opposition parties, the political focus was on whether the rebel deputies within Mr Tsipras’s party would manage to win over more support from wavering colleagues.

In the last two bailout-related parliamentary votes, a quarter of Syriza MPs withheld their support from the government by either voting against or abstaining.

“The new memorandum completely reverses the mandate of the Greek people, who on July 5th rejected the poverty and neocolonial dependency of the memorandums and neoliberal policies,” the statement added.

Adopting a similar tone, Syriza’s youth wing condemned the country’s third memorandum with its creditors as “a violent turn towards neoliberalism” that “threatens to crush the hope of other peoples of Europe that an alternative to austerity is possible”.

Although the statement from Mr Lafazanis, who heads the Left Platform within Syriza, did not openly call for a party split, it was interpreted as such. Government sources who said his move “finalises a long foregone decision to separate from the government and Syriza, even before the jointly scheduled extraordinary congress” of the party, expected in September.

The figures from the country’s statistical agency, Elstat, defied the predictions of many economists, who had expected a contraction of 0.5 per cent.

Beating their Greek counterparts to it, deputies in Finland, which had been one of the strongest proponents of a temporary Greek exit from the common currency some weeks ago, voted to allow its finance minister to approve the deal at the Eurogroup meeting.

The Greek agreement envisages a primary deficit of -0.25 per cent for this year and a surplus of 3.5 per cent by 2018 and the recapitalisation of the country’s beleaguered banks - which remain subject to capital controls - by December. It also calls on Greece to push ahead with the privatisation of its main ports, regional airports and power grid operator.