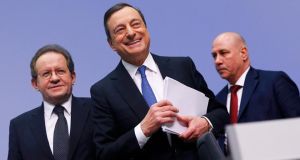 Businesses across Asia and Europe have slashed prices at the start of the year to drum up trade, surveys showed on Friday, a day after the European Central Bank voted to print money in a bid to revive inflation.

Euro zone firms cut prices at the fastest rate in nearly five years and Chinese factories cut them for the sixth straight month, while economic growth in South Korea slowed sharply, raising the prospect of more easing from central banks in Asia.

The ECB took the policy plunge on Thursday, announcing a government bond-buying programme which will pump hundreds of billions of euros in new money into a sagging euro zone economy. With Chinese factory growth stalling for a second month, expectations are high that Beijing will announce fresh stimulus measures soon. “2015 is unlikely to be a particularly fantastic year with regards to global growth,” said Peter Dixon, an economist at Commerzbank. “There is no doubt that across the world central banks are being a little bit more aggressive.

Disinflation has certainly changed the monetary prospects.” Markit’s Eurozone Composite Flash Purchasing Managers’ Index (PMI), based on surveys of thousands of companies and seen as a good growth indicator, bounced to a five-month high of 52.2 from December’s 51.4. That beat the median forecast of 51.8 and marked the 19th month above the 50 line denoting growth. But Markit said it pointed to first-quarter growth of just 0.2 per cent, slightly worse than the 0.3 per cent predicted in a Reuters poll last week.

The index for prices charged slumped to 46.9, its lowest since February 2010, and comes after official data showed consumer prices fell 0.2 per cent in December, the first negative print since the depths of the financial crisis in 2009. Falling prices in Britain gave an unexpected boost to retailers there in December, with sales rising 0.4 per cent on the month after surging by 1.6 per cent in November, the strongest growth in more than a decade. Business surveys due later on Friday on US manufacturing may highlight concerns that its economy is the only engine driving global growth this year.

Emerging Asian economies will grow at a lacklustre pace this year and next, held back by a slowdown in China and weak global demand, while cooling inflation will probably throw open the door for monetary policy easing, a Reuters poll showed on Friday.

China’s HSBC/Markit Flash Manufacturing PMI hovered at 49.8 in January, little changed from December, but the input prices index fell to the lowest since the global financial crisis, reflecting a tumble in oil prices that is spreading disinflationary pressure throughout the globe.

Analysts at Nomura saw more downside pressure on China’s producer prices, “enhancing our concerns over deflation”. “This looks like a trend and it will affect core inflation at some stage. So the PBOC will very likely react to such deflation concerns,” said Chang Chun Hua, an economist at Nomura.