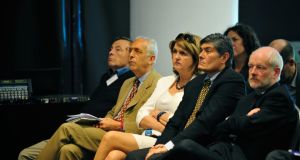 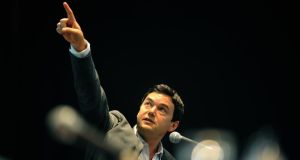 Thomas Piketty, author of Capital in the Twenty-First Century, points the way forward at the Tasc forum yesterday. 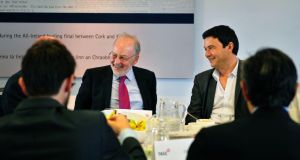 The thorny issues of taxing corporate profits and transparency over the rates being paid by large multinationals should have been included in the transatlantic trade agreement currently being negotiated by the European Union and the United States, French economist Thomas Piketty told a conference in Dublin yesterday.

“I think this is crazy,” he said. “In 2014/2015, international trade is already very much close to free trade. It would be crazy to have a treaty without a strong fiscal and social [element].”

It is aimed at boosting economic activity between the regions by eliminating red tape and tariffs to reduce costs and open up new markets.

Capital in the Twenty-First Century

He noted the EU and US together account for half of global gross domestic product, and collective action by them to tackle tax avoidance by large multinationals would pressurise tax havens and the corporates to change the way they do business.

Mr Piketty said if we want to have a “minimum tax applied to multinational corporations”, or want to put in place a “binding treaty” to tackle tax havens over their lack of transparency or establish a global registry of financial assets, “this is the place [the treaty negotiations] to do it”.

“Let’s do it,” he said to applause from the 650 delegates gathered to hear him speak at the Tasc annual conference in Croke Park.

When asked by The Irish Times if it was fair for corporations to only pay a maximum 12.5 per cent tax on their profits when citizens have to pay up to 52 per cent of their gross income, Mr Piketty said such regimes were counter-productive and denied valuable income to a State for education, health and other social services.

“It’s a zero-sum game. I’m not trying to blame Ireland [for this]. Every country in Europe is at the game.”

Mr Piketty said it was important tax rates were set at a fair rate across the board to ensure the poorest members of society did not end up paying a disproportionate part of their income to fund the State.

“Is it easy to have more information and co-ordination [between countries on tax]? No. Is it impossible? No. I think it’s possible to make progress. Five years ago people were saying that bank secrecy in Switzerland would be with us forever. Then the United States placed sanctions on the Swiss banks and suddenly there was automatic transmission of information. Suddenly Luxembourg did the same. It was the beginning of a move in this direction.

“If you have proper sanctions you can make progress. So it is sad that European countries did not move to reform. ”

In his bestselling book, the French economist uses data on wealth from Forbes magazine, which carries such rankings each year. He said this was as reliable a source of information available as any other in the absence of official figures.

This data shows the top 1 per cent of wealthholders saw their incomes grow by an average of 6.8 per cent a year between 1987 and 2013, including the rate of inflation.

This was more than three times the average wealth per adult and just more than twice the growth in world GDP.

1 Fierce backlash to Dutch hard line on eurobonds
2 How to budget your way through financial realities of Covid-19
3 US authorities scrutinise Zoom’s practices as app’s traffic surges
4 Covid-19: Builders cease work on big developments
5 Meath couple’s company hit with €105m discount on purchase price
6 Medtronic shares ventilator design publicly to increase production
7 US stocks end quarter down 20% in biggest drop since 2008
8 Will pandemic payment give me PRSI stamp as retirement looms?
9 Communicorp cuts pay by up to 25% at its radio stations
10 Ireland ‘resilient’ enough to cope with cost of Covid-19, says Moody’s
Real news has value SUBSCRIBE