EU to rule against Ireland in Apple tax case 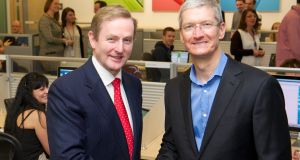 The EU Commission is preparing to issue a final ruling that Ireland’s tax deal with Apple represented illegal state aid.

However sources believe the amount of tax Ireland will be asked to collect from the US giant will be much less than the billions of euro which had been originally suggested by some analysts.

The Government and Apple will immediately signal that they will challenge the ruling in the European courts, a process that could take some years. Sources say that government and the US company remain in “lock step” on the issue.

When the EU Commission issued its preliminary adverse finding in 2014, which was that it believed that the Irish government had given Apple illegal state aid, some estimates were that it would seek to oblige Ireland to collect as much as €18 billion to €19 billion in taxes dating backing to the 1990s.

Sources now believe the likely outcome will involve a much smaller sum. While the precise terms of the EU Commission decision - and whether it will mention an actual figure - remain unclear, sources believe that the sum involved is likely to be in the hundreds of millions rather than the billions. One suggestion is that Ireland could be pressed to recoup somewhere between €500 million and €1 billion from Apple. However the final terms of the commission decision are not yet fully clear.

While this amount of money would not be significant for Apple, both it and the Irish government are believed certain to appeal any ruling. Both Apple and the Government have denied any wrongdoing.

Earlier this year the EU Competition Commissioner, Margrethe Vestager, told the Minister for Finance, Michael Noonan, that the decision could come in September or October. Sources now believe it may emerge late next week or early the following week.

The Apple case has become a highly controversial issue between the EU Commission and Washington. Earlier this week, the US Treasury published a White Paper arguing that the EU Commission was exceeding its powers in its tax investigations.

In what was seen as a clear reference to the Apple case, it also made a strong argument that the EU Commission should not seek to recoup back tax dating back years from the companies involved.

Apple is just one of a number of companies whose tax affairs the Commission is investigating, but it is by far the most high profile of the cases involved.

An adverse ruling is likely to heighten tensions between Brussels and Washington. The white paper suggested that the treasury was considering retaliatory measures, and also that the tax disputes could have a “chilling” impact on any trans-Atlantic investment.

The Irish government has repeatedly insisted that Apple did not get any “special” date, but the low level of tax paid by Apple of profits moved through Ireland - often 2 per cent or less - has proved highly controversial.

1 How much state pension will I get next year?
2 Am I crazy to consider switching to an Ulster Bank mortgage?
3 Housing crisis here to stay in absence of big rethink, industry warns
4 Avolon appoints Paul Geaney as chief risk officer
5 Up or down – how much is your Local Property Tax this year?
6 PTSB plays down Ulster Bank talk as it sells €1.4bn of loans
7 Brexit to curb services trade with UK, accountants group warns
8 First Derivatives expects Covid-19 to accelerate growth
9 Irish tech company Asavie acquired by Nasdaq-listed Akamai
10 How long can Government afford to keep State pension age at 66?
Real news has value SUBSCRIBE