EU to find Apple owes Ireland billions in back taxes 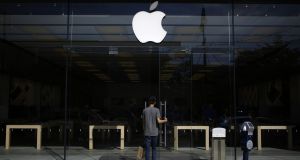 Sources who have been briefed on the matter say the amount of tax Apple will owe will be in the billions, rather than the hundreds of millions of euros that Dublin had hoped for. Photograph: Luke Sharrett/Bloomberg

The European Commission will in the morning find that Apple owes the Irish State “billions of euros” in back taxes when it rules that the technology giant’s tax arrangements in Ireland constituted a form of illegal state aid.

The ruling, to be announced in Brussels on Tuesday morning, will not stipulate a figure for the amount of tax owed, but will lay out a process and a formula by which the unpaid tax should be calculated.

It is expected that an indicative figure will be supplied by the commission later in the day. Sources who have been briefed on the matter say the amount of tax Apple will owe will be in the billions, rather than the hundreds of millions of euros that Dublin had hoped for.

However, the Government will appeal the commission’s finding, and says the money will not be available to spend, either now or in the future, Ministers have stressed. Depending on the terms of the decision, Apple may be required to pay the funds into an escrow account in the coming months.

Government Ministers will embark on an aggressive campaign to rebut the commission’s findings. “They are making up new rules for international tax,” said one Minister last night. “They are trying to make us tax Apple for stuff that doesn’t happen here. It’s nonsense.”

Apple is also certain to reject the finding and will launch a strong defence, while political sources said that they expect the US government to weigh in later in the week in support of Ireland and Apple.

However, the larger than expected size of the sum at stake will complicate the politics for the Irish Government, which is determined to avoid having to take the money.

While Fianna Fáil has supported the Government’s decision to appeal the decision, there was fierce criticism from other Opposition parties.

“The Government is wrong to say they will appeal the decision no matter what,” said Pearse Doherty, Sinn Féin’s finance spokesman.

“They’ve been saying it’s a reputational issue. I think it’s more damaging to continue a fight that we will ultimately lose,” he said. The Government should accept the Apple money, he insisted.

People Before Profit TD Richard Boyd-Barrett said it was “outrageous” that the Government had already spent hundreds of thousands of euros on legal fees fighting the case.

Mr Boyd-Barrett discovered through a parliamentary question that the Revenue Commissioners and the Department of Finance have already spent some €670,000 on legal fees fighting the case. The Government should accept the money as it would unpaid tax from any taxpayer, he said.

“This is money that could resolve our housing problems and the crisis in our hospitals,” he said.

However, the Government insists that even if the money if eventually paid to the Irish authorities, they will not be able to use it to finance current or capital spending. Instead, under EU rules the money must be used to pay down debt.

The contentious investigation has been under way now for more than two years. It concerns two tax rulings which the Revenue gave to Apple in 1991 and 2007. Last week the US Treasury accused the commission of acting beyond its powers in its investigations of the tax affairs of US multinationals and in particular objected to the idea of tax being collected retrospectively.

However, despite this the commission has pushed ahead with its final decision, which will be that Ireland offered illegal state aid to the US multinational.

Early estimates were that Apple could be asked to repay up to €19 billion in tax. While the final figure is expected to be substantially lower, sources say that there is no question but that it will be appealed by both sides.