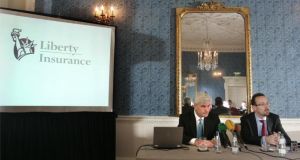 Liberty Mutual is shedding 50 per cent more Irish jobs than expected when it made the original announcement, including a number of compulsory redundancies.

A total of 425 jobs will go at Liberty Mutual Insurance Ireland, almost a third of their 1,450-strong workforce.

Back in November the company said it was looking for 285 redundancies and hoped the vast majority of those would be voluntary. Some 110 jobs will go from company headquarters in Cavan, 115 in Enniskillen, Co Fermanagh, and 200 at Blanchardstown in Dublin. Just under 500 staff work in each location.

A Liberty spokesman said there was more demand than anticipated for the programme from staff and the company decided to facilitate the request of some additional employees to leave.

In total 380 employees took up the offer of voluntary redundancy and an additional 45 compulsory redundancies were implemented “because of the need to align management roles and also frontline and support levels across the company”, according to a statement.

A spokesman said a majority of the employees would leave during March.