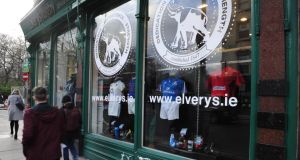 Elverys is to create 40 new jobs as part of a €1.5 million investment

Two companies have announced the creation of 69 new jobs in Ireland.

Irish-owned sports chain Elverys Intersport is to create 40 new positions as part of a €1.5 million investment across its retail network and online platform.

Elverys, which has more than 50 sportswear stores and 700 staff In Ireland, was bought out of examinership by its management last April with backing from CapNua and AIB.

“The 40 new jobs will be created right across our network in our e-commerce, marketing, retail management and retail operations’ departments. The spend across the group represents our commitment to the future success of Elverys Intersport in Ireland. We are deploying €1.5 million across the development of our retail network and our online platform over the course of the year. This includes a complete refit of our Blanchardstown, Sligo and Arklow stores, the opening of a new store in St Stephen’s Green, the shop fronts of all stores and the development of a new online platform,” said Elverys Intersport chief executive Patrick Rowland.

Separately, Smarter Surfaces, a start-up company, which sells products that can turn any surface into a functional whiteboard is intending to take on 29 new employees by June 2017.

The company, which currently employs 15 people in Dublin, has recently signed a number of new international distribution deals worth approximately €6 million over the next two years.

Smarter Surfaces, which was previously known as Smart Wall Paint, was founded by Ronan Clarke in 2011.