Capital ranked only 20th when it comes to stability, healthcare, culture and environment 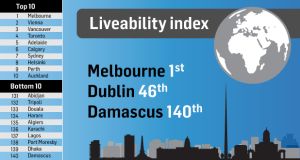 It may be one of the most sought after places to live judging by property prices but in terms of liveability Dublin comes way down the list.

According to the Economist Intelligence Unit’s annual liveability index, the Irish capital ranks only 20th in Europe, behind cities like Vienna, Zurich, Lyon, Hamburg, Dusseldorf and Madrid.

The report assesses the liveability of cities based on a number of key factors, including stability and the quality of healthcare, culture, the environment, education and infrastructure.

In European terms, only Rome, Budapest, Manchester, Reykjavik, London, Lisbon and Athens were deemed less attractive places than Dublin to live in.

In global terms, Dublin was ranked in joint 46th place out of 140 alongside Houston in the US and Milan.

Melbourne topped the rankings as the world’s most pleasant city to live in for the fourth year running, followed by Vienna (Europe’s number one), Vancouver and Toronto.

Australia and Canada, popular destinations with Irish emigrants, accounted for seven of the top ten cities.

Bottom of the global rankings was war-torn Damascus, which was deemed worse than Dhaka in Bangladesh, Port Moresby in Papua New Guinea and Lagos, Nigeria.

The survey also included a listing of cities whose liveability has declined most in the past five years.

Damascus again fares worst, recording a 28 per cent decline in five years but others on the list include the Russian cities of St Petersburg and Moscow, both declining by 3.3 per cent, Sofia down 3.5 per cent and Athens dropping by 3.7 per cent.

Kiev, capital of Ukraine where pro-Russian rebels are battling Ukrainian forces in the east of the country, dropped 17.8 per cent, the survey found and is ranked 124th of 140.

“The ranking...shows that since 2009 average liveability across the world has fallen by 0.7 percent led by a 1.3 percent fall in the score for stability and safety,” the EIU said in a statement.

“While this may seem marginal, it highlights that over 50 of the cities surveyed have seen declines in liveability over the last five years.

“Recent conflicts in Ukraine and the Middle East have underlined continuing fallout from a decade of destabilising events ranging from the war in Iraq to the Palestinian Intifada and the Arab Spring,” it added.