Davos to focus on income inequality 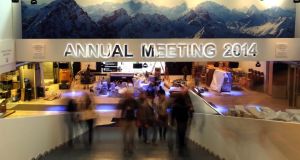 People move through the main hall of the Congress Center ahead of the World Economic Forum 2014 in Davos, Switzerland. Photographer: Simon Dawson/Bloomberg

The International Monetary Fund has highlighted the threat posed to the global economy by growing income inequality as the world’s business and political leaders prepare to head off to the World Economic Forum in Davos this week.

IMF managing director Christine Lagarde is concerned that the fruits of economic activity in many countries are not being widely shared.

“Business and political leaders at the World Economic Forum should remember that in far too many countries, the benefits of growth are being enjoyed by far too few people,” she said. “This is not a recipe for stability and sustainability.”

The message is hitting home. Japanese prime minister Shinzo Abe is coming to Switzerland with the message that Japanese companies must raise wages, while the government of British prime minister David Cameron last week called for a large inflation-busting rise in the British minimum wage.

Campaigners argue that the world’s population has rarely had such unequal access to wealth and power. In a report published today, the Oxfam charity used the Forbes rich list to calculate that the $1.7 trillion in wealth owned by the world’s richest 85 people is the same as that shared between the bottom half of the world’s population. – Copyright The Financial Times Limited 2014