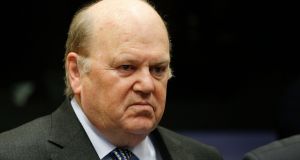 Minister for Finance Michael Noonan: the European Commission has expressed frustration with recent Irish economic policy decisions, noting that ‘efforts to broaden the tax base have been limited’. Photograph: AFP

The Government has been warned it must broaden its tax base to reduce the country’s vulnerability to economic shocks, in the first report by the European Commission since the formation of the new government.

In a hard-hitting analysis of the Irish economy, the European Commission notes that “efforts to broaden the tax base have been limited,” noting that recent tax measures have focused on tax cuts and reliefs.

While specific tax measures are not mentioned in the report, EU officials are known to be concerned about changes to USC and the planned suspension of water charges.

One official said that, due to the extreme vulnerability of the Irish economy to economic fluctuations because of the nature of its open economy, the construction of a broad tax base was essential to act as “a buffer” against economic shocks.

The report, known as a ‘Country Specific Recommendation’, is based on the National Reform Plan submitted by the government to Brussels at the end of April.

The report is also strongly critical of the healthcare system in Ireland, urging the government to increase the “cost-effectiveness” of healthcare.

Amid reports that the newly appointed Minister for Health Simon Harris is seeking to reduce the price paid by the HSE for drugs, the recommendation highlights the issue of State spending on pharmaceuticals, in particularly “the high cost of single-supplier medicines.”

It also criticises the primary health care system, whereby 40 per cent of the population has access to GPs “while the rest bear the full cost,” but it adds that uncertainty surrounds reform of the healthcare system as the universal health insurance model is “in a quandary.”

Similarly, it regrets that concessions to the legal professions were made at a late stage of the Legal Services Regulation Act which “significantly reduced the initial ambition of the reform”. “Legal services are an input to all sectors of the economy and their cost has a bearing on Ireland’s competitiveness.”

Similarly it highlights the problem of non-performing loans in the banking sector. Noting that most mortgage restructuring in Ireland is temporary, it warns of a risk of “re-default.” The high debt levels of SMEs is highlighted in particular.

In a technical, though significant, development, Ireland has also exited the Excessive Deficit Procedure which means that it has successfully brought its deficit below the ceiling of 3 per cent of GDP. The Commission notes that according to the Stability Programme submitted by the government on April 29th, this will continue in 2016 and 2017, in line with the Commission’s own projections.

This also means that the country is moving from the corrective into the preventative arm of the Stability and Growth Pact, a development that will allow for further spending but which was already factored in to Budget 2016 by the previous government.

The European Commission issues country-specific recommendations to all 28 EU member states each Spring -excluding Greece which is still in a bailout programme – basing its analysis on figures supplied by national capitals and the Commission’s own forecasts.

Following tense political debate, the European Commission refrained from imposing fines on Spain and Portugal, despite the countries breaching their deficit targets under the Stability and Growth Pact. Instead, the Commission will review the situation for both countries in early July. “This is not the right moment economically or politically” to impose sanctions, EU Commissioner Pierre Moscovici said, as he announced that both countries would be given another year to address its excessive deficit.

The move was widely seen as an acknowledgement of the political situation in Spain, which faces another general election next June.

In a significant win for Italy, which is continuing to struggle one of the highest debt levels in the European Union, the Commission said that the euro zone’s third -largest economy was now in compliance with the Commission’s rules on debt. But it warned that it will review its assessment of Italy in November.