New US president’s trade and tax policies carry risks for a small, open economy like ours 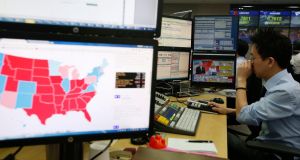 A dealer at the KEB Hana Bank in Seoul, South Korea. Financial markets hate uncertainty, and the prospect of a Trump presidency brings plenty of that. Photograph: Jeon Heon-Kyun/EPA

First Brexit. Then this. Lighting has just struck twice for the Irish economy. The Trump victory means a whole new set of uncertainties and risks for the economic outlook. The initial focus will be on the financial markets, where turmoil will itself have an impact on economic confidence. Afer a serious initial wobble, the market reaction has been calmer than would have been expected, but nobody really knows where markets are going next.

Beyond that, the new president’s policies in areas such as trade and tax carry particular risks for a small open economy like Ireland. In particular, Trump’s plans to cut US corporation tax levels would remove one key attraction which Ireland offers to US companies – and would reduce the attraction for US firms of establishing overseas. In turn this would threaten our drive to attract foreign direct investment (FDI).

It will be remembered as a year of two extraordinary hits from international political events. First, our main trading partner, the UK, decided to leave the EU. Then the largest source of inward investment into our economy, the US, elected a president whose key policy platform was to keep jobs at home. Both developments came from a broad popular unhappiness with what conventional politics is delivering.

Just like Brexit, it will take time for the likely impact of this on our economic growth to become clear. But the uncertainty about the direction of the world’s largest economy and risks of international trade tensions are a significant worry heading into 2017, not only for Ireland but for the world economy. Economic growth forecasts, already cut in the wake of Brexit, may well have to be trimmed again for 2017 if there is a hit to international confidence, with implications for jobs, incomes and the Government’s finances.

US economist Paul Krugman wrote on the New York Times website as the results were declared that Trump’s policies were so incoherent that “we are very probably looking at a global recession, with no end in sight”. The initial market reaction suggest that Krugman’s extreme pessimism is notuniversally shared. But there can be no doubt that the combination of the US election with Brexit puts a question mark over global growth prospects.

The initial focus will be on the financial markets. The old saying is that markets hate uncertainty, and the prospect of a Trump presidency brings plenty of that. Markets will reflect any fears that this unpredictable change of direction will hit confidence and growth. Equities and the US dollar initially heading downwards aas the result became clear. Equities then steadied during the day, but we are still in the early hours of reaction here. Days of uncertainty and volatility may well be in prospect, even if the initial reaction is more relaxed than might be expected. There is already speculation that the US Federal Reserve Board will have to hold off from an expected increase in US interest rates in December, due to the new fears about the outlook for growth.

Market upheavals have an economic cost in themselves. They hit investors and pension funds and also damage confidence. In times of turmoil, businesses tend to hold off investing and consumers pull in their horns. The latest surveys show consumer and business confidence in Ireland already on the wane, amid a clutch of other indicators suggesting that the economy is slowing. Headlines about markets’ nerves will not help. We can onlyhope that the initial relatively calm reaction is a sign of things to come.

A falling US dollar – if this trend is sustained – will also not help Ireland. It will make Ireland a more expensive destination for US tourists, at the same time as the UK market is hit by a fall in sterling. And it will affect exporters, too. The US accounts for over 15 per cent of the total, and so a falling dollar and uncertain outlook is not good news.

These trade threats, suggesting a move away from the multilateral process of trade negotiations and from regional trade deals, have particularly worried economists, though what Trump can actually push through remains to be seen. They fear trade wars as other countries impose tariffs and other trade barriers in return, and potentially a move to a new protectionist era. Certainly a deal which the US had negotiated with 12 countries around the Pacific is now dead, as is the the TTIP, the proposed deal between Europe and the US.

The EU has not been a particular focus in Trump’s trade rhetoric, but clearly any move to a more inwardly looking US could affect Irish export growth in the years ahead to one of our key markets.

And then there is tax. Trump has promised to cut taxes for personal taxpayers, but it is his plans for the corporate sector which will be of more concern to Ireland. Trump has promised to fight to “ keep jobs at home” and to slash the US corporation tax rate to 15 per cent. He has also committed to look at ways to get US companies to repatriate some of the $2,000 billion they have stashed overseas, possibly through a special 10 per cent tax on repatriated money. And he has committed to ending the current arrnagement under which firms can defer tax on profits made outsider the US until the money is returned to America.

Big companies will still want global operations bases. But a significant cut in US corporation tax would limit one of Ireland’s key selling points – our 12.5 per cent tax rate on corporate profits. Our marketing to attract FDI in future is going to have to focus on other areas. Also, trade restrictions and a “jobs at home” presidency, together with the promised tax changes, may well have a significant impact on the flow of foreign direct investment out of the US.

Just like Brexit, a Trump presidency brings a whole new bag of uncertainties to the economic outlook. His election is part of a populist trend which carries big long-term questions for politics, economics and business. In the meantime, it is going to be a bumpy ride.