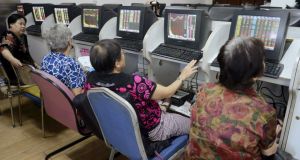 China’s exports declined in August, adding to growth pressures facing the world’s second-largest economy. Overseas shipments fell 5.5 per cent from a year earlier in dollar terms, the customs administration said, compared to an 8.3 per cent drop in July.

Imports fell 13.8 per cent, widening from an 8.1 per cent decrease and leaving a trade surplus of $60.2 billion. The data highlight tepid demand around the world and sliding prices for inputs to China’s factories and their shipments abroad. Steps to boost growth include five rate cuts since November and the People’s Bank of China’s unexpected yuan devaluation last month.

“China is set to miss its export growth target for this year, and there will be no help from the external demand side for economic growth,” said Liu Xuezhi, a macroeconomic analyst at Bank of Communications in Shanghai. “China’s modest yuan devaluation has yet to show any effect on exporters.”

Weak exports mean the government must do more to stabilise growth, Liu said. “The government is already trying hard to boost infrastructure spending, and that will be more important than exports for overall growth,” he said.

Exports fell 1.4 per cent in the first eight months from a year earlier and imports declined 14.5 per cent. That compares with the government’s goal of a 6 per cent increase in total trade this year. Shipments to the US and Association of Southeast Asian Nations rose from a year earlier in the first eight months, while exports to Hong Kong, Japan and Brazil dropped more than the overall slide. The chemical explosion in the northern port city of Tianjin weighed on shipments, though the impact may be short-lived, analysts at Goldman Sachs ed by Song Yu wrote in a report ahead of the data.

1 Basic income for all: Has the Covid crisis given us a new economic model?
2 ‘I don’t need to do any of this. . .I don’t actually need to work.’
3 Promontoria barred from pursuing doctor over Ulster Bank loan
4 Only way is up for Stripe as valuation skyrockets
5 Unilever’s Dutch and British arms merge after 90 years ahead of Brexit
6 Kinzen raises $2.2m as it helps clients fight ‘misinformation’
7 Online shoppers face unwelcome tax surprise
8 Irish designer of Oxford vaccine: ‘I’ve never worked so hard in my life’
9 Direct sea routes to Europe offer certainty in choppy Brexit waters
10 Fiona Reddan: Who’s afraid of Revolut? Not AIB and BOI it seems
Real news has value SUBSCRIBE