Severity of the impact is difficult to gauge, says chief economist Gabriel Fagan 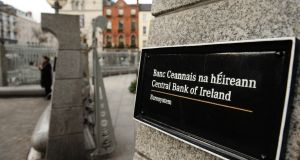 Central Bank now expects GDP growth of 4.9 per cent this year, down 0.2 of a percentage point

The Central Bank has cut its growth forecasts for this year and next, citing Ireland’s “particular exposure” to the fallout from Brexit.

The bank now expects GDP growth of 4.9 per cent this year, down 0.2 percentage points on its previous forecast and 3.6 per cent next year, down 0.6 of a point.

But it cautioned that its estimates, which include a cut to its forecasted rate of export growth, had been made at a time of heightened uncertainty and that the risks to its forecasts are firmly “on the downside”.

“The severity of this impact is difficult to gauge,” said Central Bank chief economist Gabriel Fagan. “The impact on the Irish economy could be larger than what we have pencilled into the forecast.”

As a result, the “best path” for the Government to adopt on budget policy is a cautious and prudent one, he said, so that the economy is in the best shape possible to withstand future shocks.

The bank’s latest quarterly bulletin said the unexpected Brexit referendum result in the UK, combined with the distorting effect of the less than meaningful GDP figures published by the Central Statistics Office (CSO), were creating major difficulties in compiling forecasts.

“Forecasters always tend to say it is a very difficult time to forecast - there is so much uncertainty out there,” Mr Fagan said. “Well, on this occasion it is actually true.”

The close links between the UK and Irish economies create a “particular exposure” for Ireland, it said, with sectors such as agri-food, clothing and footwear, and tourism especially vulnerable.

The impact of Brexit on consumer spending and employment is expected to be smaller, but still adverse.

“Our overall assessment is that, in both the short term and the long term, the economic impact of the Brexit referendum is set to be negative and material,” said John Flynn, head of economic analysis at the Central Bank.

While the UK is negotiating with Europe, there is potential for a prolonged period of uncertainty, it says, which could damage spending and investment confidence. During this time, the Irish economy could suffer from either protracted periods of risk-averse behaviour, or spikes of risk-aversion.

In the long term, the scale of the impact depends on the extent to which the free movement of goods, services, people and financial interactions between the EU and the UK is affected, once Brexit negotiations have concluded.

“There is a wide range of possible outcomes,” Mr Flynn noted.

While the economic outlook is still “relatively favourable”, Mr Flynn said, the downside risks include the possibility that Brexit has a bigger impact than expected on the UK economy and on global growth.

“We have no hard data on Brexit at the moment, so we are a bit in the air,” said Luca Onorante, acting head of monetary policy at the Central Bank.

Calculating the performance of the economy has been “made more problematic” by the extraordinary scale of the recent Central Statistics Office (CSO) revisions to its national output figures, Mr Fagan said.

The figures distort the picture of what is happening in the Irish economy and make it difficult to interpret key data such as the level of borrowing and debt compared to GDP.

Rather than focus on such ratios, the Government should focus on abolishing the deficit in cash terms by 2018, the bank said.

It must be careful not to rely “on volatile sources of revenue which may turn out to be transitory”, Mr Fagan said.

Although the factors that caused the CSO to revise GDP growth for 2015 from 7.8 per cent to 26.3 per cent were long known to economists, “the sheer scale was completely unanticipated”.

There is a risk that a similarly dramatic downward revision to the numbers could take place at some point in the future.

“I don’t necessarily think it’s likely, but we have seen dramatic movements as a result of transactions by a few individual companies in one direction. We didn’t anticipate the magnitude of this. There is nothing to rule out movements in the other direction,” Mr Fagan said.

“What goes up can possibly go down, and we should be aware of that possibility.”

The Central Bank is involved in a working group that has been established by the CSO to develop more meaningful and commonly agreed indicators of real Irish economic activity, such as a measure of underlying domestic demand.

The bank estimates that underlying growth in the domestic economy was around 5 per cent in 2015, far lower than the 26 per cent GDP growth.