Cameron warns of Brexit threat to jobs in Northern Ireland 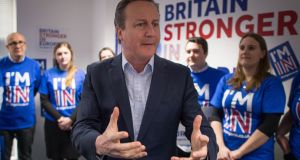 David Cameron: ‘I’m clear that the people of Northern Ireland, and the whole UK, are better off in a reformed European Union.’ Photograph: Stefan Rousseau/PA Wire.

British prime minister David Cameron has warned that jobs, investment and farm incomes in Northern Ireland could be at risk if the UK leaves the European Union. Speaking ahead of his first visit to the North since he announced the referendum on Britain’s EU membership, he said the border made access to EU markets especially important for exporters there.

Putting that at risk is a leap in the dark,” he said.

Mr Cameron highlighted the importance of the EU to Northern Ireland’s farmers, who are more dependent on EU subsidies than their counterparts in the rest of Ireland and the UK.

“I’ve never argued the EU is perfect, but I believe a reformed Europe gives them access to a huge single market and an income that helps them keep food prices low for families ,” he said. The UK treasury estimates that 50,000 jobs in the North could be linked to trade with the rest of the EU.