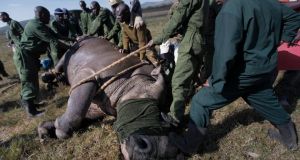 A sedated white rhino is blindfolded and strapped with a rope by veterinarians and rangers of the Kenya Wildlife Service (KWS) after it was shot with a tranquilizer dart from a helicopter to be sedated in a private conservancy near Naivasha, Kenya, 30 October 2013. The horn of the rhino was cut and a GPS-tracking device was fitted to enable rangers and scientists to track the rhinos’ movements and help combat poaching. Photograph: Dai Kurokawa/EPA

American philanthropist Howard Buffett donated $24 million to South Africa’s national parks service today to fund a high-tech campaign against rhino poaching which he compared to the United States’ war on drugs on its southern border.

The money will fund a 30-month campaign to try to reverse a losing battle being fought against rhino poachers in the flagship Kruger Park, where illegal hunters infiltrating from Mozambique have been decimating the rhino population.

It will provide park rangers with a helicopter and other high-tech equipment, such as an aerostat balloon and land vehicles equipped with sophisticated electronic sensors, to track down poachers.

The project also plans to place sensors on fencing along the border with neighbouring Mozambique. “This is very much like our drug war on our US/Mexican border,” said Howard Buffett, referring to the campaign by American and Mexican authorities against narcotics traffickers.

South Africa’s rhino population totals around 20,000. “We are losing the battle all across the continent ... we have to fight it every place we can,” Buffett said. Rhino hunting is driven by soaring demand in newly affluent Asian countries such as Vietnam and China, where the animal’s horns are prized as a key ingredient in traditional medicine.

Buffett, through his charitable foundation, has supported farming, wildlife conservation and poverty alleviation projects across Africa, often concentrating on hotspots which are suffering from conflict or the aftermath of wars.

“When you see what conflict does to people, you cannot turn away. That conflict is fuelled by rhino horns, elephant ivory,” said Buffett, referring to the close link between insurgencies and conflicts in Africa and trafficking of natural resources. Rhino horn has a street value of more than $65,000 a kg in Asia, making it more valuable than platinum, gold or cocaine.

Retired South African Maj Gen Johan Jooste, who is leading the fight against poaching in the Kruger, said his rangers were confronting hundreds of poachers who had made their bases in villages on the Mozambican side, in Maputo and Gaza provinces.

Criminal syndicates promise cash to poor and unemployed villagers willing to take the risk of hunting down the animals. Jooste envisaged a hard campaign. “The talking is the easy part, this is not a sprint, it’s a marathon,” he said.