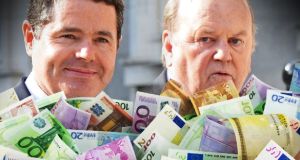 Social welfare payments and the State pension are to increase by €5 per week and the three lowest rates of the Universal Social Charge (USC) are to fall by 0.5 per cent as part of the budget package for 2017 announced by the Government.

The details were set out by Minister for Finance Michael Noonan and Minister for Public Expenditure Paschal Donohoe in the Dáil on Tuesday afternoon.

The only taxation increase is an extra 50 cent being added to the price of a packet of 20 cigarettes. The excise on alcohol and fuel is being left unchanged.

- The total budget adjustment for 2017 is €1.3 billion, weighted at about 3:1 between spending increases and taxation cuts.

- The three lowest USC rates are being reduced by 0.5 per cent - that’s the 1 per cent, 3 per cent and 5.5 per cent rates. The threshold at which the new 2.5 per cent USC rate will be paid falls to €18,668 from €18,772. Mr Noonan says the Government is committed to phasing the USC out over time, resources permitting.

- Excise on a pack of 20 cigarettes is to increase by 50 cent, which Mr Noonan said was the only tax increase in budget. The amount of excise paid on fuel and alcohol is to be unchanged in 2017.

- The Home Renovation Incentive Scheme is being extended by two years to the end of 2018 to help those not buying new homes.

- Mr Noonan said the corporation tax rate would remain at 12.5 per cent and that “nobody is asking for it to be changed”.

- The reduced VAT rate of 9 per cent for the tourism and hospitality industry (rather than the standard rate of 13.5 per cent) is to stay in place this year.

-The rate of capital gains tax on qualifying asset disposals has been reduced from 20 per cent to 10 per cent, up to a limit of €1 million in chargeable gains.

- The level of interest relief for landlords is to be increased to 80 per cent. The full 100 per cent will be restored over a number of years through annual 5 per cent increases.

- The earned income tax credit for the self-employed is being increased by €400 to €950, which Mr Noonan says will benefit some 147,000 self-employed people.

- A period of relief from VRT on electric vehicles is being extended to five years and two years for hybrid vehicles.

- Mr Noonan says a tax on sugar-sweetened drinks will be introduced in April 2018 to coincide with similar measures in the UK.

- Some €1 billion a year will be put aside from 2018 onwards for a rainy day fund. He says the aim is to run a budget surplus from 2019 onwards.

- Mr Noonan said this was his sixth budget and that the country had overcome huge challenges, which many felt were insurmountable, in that time. He called for prudence despite the improving economic situation and said the lessons of the bad years for Ireland should not be forgotten.

- “It makes sense to avoid the mistakes of the past that could lead to overheating our economy. It is an uncertain world full of risk and now is not the time to move away from the prudent and sensible fiscal policy we have been following.”

- There will be a €5 increase in the State pension from March 1st.

- All social welfare payments will also rise in March, including jobseeker’s allowance, carer’s allowance and disability benefit. Increases are subject to the passage of the Social Welfare Bill.

- The increased jobseeker’s allowance payment to recipients under the age of 25 will be €2.70 rather than €5.

- Social welfare recipients will be entitled to a Christmas bonus equal to 85 per cent of their weekly payment (up from 75 per cent in 2015).

- Some €35 million is being provided for a Single Affordable Childcare Scheme which will commence in September. It will provide means-tested subsidies, based on parental income, for children aged between six months and 15 years and universal subsidies for all children aged six months to three years who are cared for by Tusla-registered childminders/care centres.

- Next year will see the highest-ever level of health spending (€14.6 billion), but Mr Donohoe warned the €497 million increase came with a need for great responsibility.

- Medical card coverage will be extended to all children in receipt of the domiciliary care allowance.

- The Government is reducing the €25 cap on prescription charges for over-70s to €20 from March 1st.

- An additional €15 million has been allocated to the National Treatment Purchase Fund to reduce waiting lists.

- Education spending is to increase by €458 million to some €9.5 billion, which the Minister said would fund an extensive programme of recruitment next year, including 2,400 teaching posts, of which 900 will be resource teachers.

- Funding for the Department of Defence is to increase by €16 million.

- A total of €15 million will be provided to help deliver high-speed broadband to rural areas.

- Some €1.2 billion has been committed to support the Housing Action Plan next year. It aims to deliver 47,000 social housing units by 2021.

- Capital spending on projects such as new roads and rail will be €4.5 billion in 2017.

- Mr Donohoe said some 4,500 additional frontline staff, including gardaí, nurses and teachers, would be recruited.