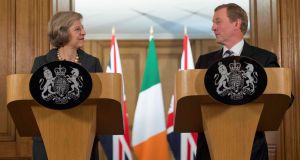 The long-term impact of Brexit on Ireland is likely to be “severe” with the economy shrinking by up to 4 per cent, a study by the Department of Finance and the Economic and Social Research Institute (ESRI) has warned.

The paper, which focuses on the period after Britain’s planned departure from the EU in 2019, also warns of negative consequences for employment, wages and the public finances lasting for at least 10 years.

The study says the initial shock to the Irish economy will be transmitted via the trade sector in the form of a drop in export demand from the UK. This will stem from lower economic growth in the UK itself and the potentially damaging effects of a new tariff regime.

Under a “hard Brexit” scenario, with the UK leaving the single market altogether, Irish gross domestic product (GDP) is expected to be 3.5 per cent lower than it might have been within five years, equating to nearly €10 billion in lost output. Over a ten-year period, the potential contraction in GDP is projected to be 3.8 per cent.

The “hard Brexit” scenario, which assumes the reintroduction of trade tariffs, is also predicted to push unemployment 1.9 points higher than it might have been, while reducing average wages by up to 3.6 per cent.

The fall in output and employment is also likely to translate into reduced Government revenue from a range of taxes, while the increase in unemployment will necessitate greater Government spending on welfare, both of which will place further pressure on State finances. The projections are based on a zero policy response from the Government.

Under a more benign scenario, with the UK joining the European Economic Area (EEA) like Norway and thereby avoiding a nasty tariff regime, Irish GDP is still forecast to be down 2.3 per cent while unemployment is expected to be 1.2 per cent higher with average wages 2.2 per cent lower.

In the event of Britain securing a free trade agreement with the EU, the economy here is expected to shrink by 2.7 per cent, with unemployment 1. 4 per cent higher and wages 2.5 per cent below where they might have been.

The Department of Finance has already said it expects growth to be 0.5 per cent lower in 2017, coming in at 3 per cent rather than 3.5 per cent.

The department’s study, while acknowledging the high degree of uncertainty around Brexit, provides the first comprehensive long-term post-Brexit outlook for the Irish economy.

It is based on research by Britain’s National Institute for Economic and Social Research (NIESR), which assessed the impact of Brexit on Britain and the world.

The ESRI ran these projections through its own model to calculate the likely effects on the Irish economy. The study assumes that tariffs and other trade restrictions would apply immediately on Britain’s exit.

“There is almost a complete consensus in the existing literature that Brexit will have a negative effect on the UK economy both in the short term via uncertainty and over the medium to long term via trade and foreign direct investment,” it said.

“The UK is one of Ireland’s closest economic partners and, as such, Ireland will be very exposed to the effects of the UK leaving the EU.”

Labour Party leader Brendan Howlin, meanwhile, has suggested the Government should “reconvene” the New Ireland Forum, a body set up in the 1980s to deal with the Troubles, as a means of dealing with the current Brexit crisis.

Separately, Minister for Communications Denis Naughten has unveiled new plans to develop the Port of Foynes in Limerick as a trade gateway to the US to take advantage of the opportunities afforded by Brexit.