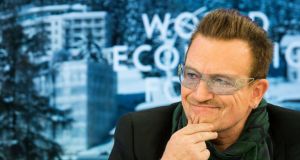 Bono: “Some of the criminals around here are not wearing ski masks, they are wearing skis.” Photograph: Jean-Christophe Bott/EPA

Bono has challenged world business leaders assembled in Davos to boost the fight against world poverty by raising ethical standards in their respective sectors.

The Irish activist participated in a discussion with British prime minister David Cameron and others who have drafted a successor to the United Nations’ Millennium Development Goals (MDG), which end in 2015.

The MDG included targets for reducing poverty, hunger and child mortality and combating HIV/AIDS, malaria and other diseases.

The new goals, known as the sustainable development goals, aim to eliminate extreme poverty by 2030 by renewing targets not achieved in the first round and adding new proposals, such as fighting corruption.

The U2 singer admitted yesterday the MDG was a “shite name” that put people off and that the proposed new name - “Sustainable Millenium Goals” - sounded like “a bad heavy metal band”.

Even his own band, though “really supportive” of his campaigning against poverty, had only to hear MDG and “you can see their eyes rolling”.

He suggested worldwide competitions to find a better title for the new programe.

“We want ownership from the wider population,” he said.

The Davos panel agreed that the success of the new goals, in particular the fight against corruption, would hinge on western leaders gathered in Davos acknowledging a need for greater transparency in how they do business.

“Some of the criminals around here are not wearing ski masks, they are wearing skis,” said Bono. “Capitalism can be a great creative force but it can be a destructive force. It is not immoral but it is ammoral, we need to give it some instructions.”

He said he was confident the new goals to tackle poverty were complementary and not contradictory to business and enterprise.

“The two things people want is a job and a voice,” said Mr Cameron.

Nigerian finance minister Ngozi Okonjo-Iweala was also involved in drafting the new goals through a public consultation with the world’s poor.

She expressed optimism that the new goals would be embraced because they address universal issues.

“Gender rights are not just about people at bottom end of scale,” she said. “Corruption and governance may be more of a problem in countries of the south but accountability for it has a north and south end of it.”

Save the Children International CEO Jasmine Whitbread said she hoped the last 700 days of the existing MDG would see a redoubled push to complete goals not yet met, such as eliminating infant mortality

“It is always easier to do the first half and that is what we are facing now,” she said, “but with a redoubled effort we can manage it.”