BOE governor won’t tell people how to vote on Brexit 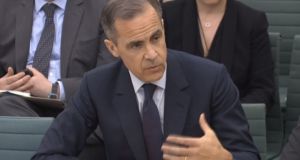 The Bank of England took centre stage in the increasingly bitter EU referendum battle after it signalled concerns that the vote could trigger panic in financial markets. (Photograph: PA Wire)

Mark Carney said the Bank of England won’t tell people how to vote in Britain’s June referendum on the nation’s membership of the European Union. “To state the obvious, economic questions are important questions in terms of the broader decision the people of the UK have to make,” the BOE governor told lawmakers on Tuesday.

Still, they are not the only consideration and the central bank will not be making any recommendation on the topic, he said. Carney and Deputy Governor Jon Cunliffe are testifying to lawmakers on the economic and financial costs and benefits of EU membership, a day after the central bank said it will make extra liquidity available to banks in the run-up to the June 23 referendum.

While BOE officials have spent months trying to avoid the tense political battle over ‘Brexit,’ economists at Goldman Sachs and BlackRock are among those warning trade and investment are at risk, and some surveys suggest the uncertainty is already having a detrimental effect.

The opening of the hearing was dominated by a testy exchange between Carney and lawmaker Jacob Rees-Mogg. After Rees-Mogg at one point said Carney was doing the BOE harm because of his comments, the governor responded: “I’m not going to let that stand.”

Three additional indexed long-term repo operations will take place in the weeks around the vote, the BOE said yesterday. With immigration a key element of the UK debate, EU leaders meeting in Brussels are edging toward an agreement with Turkey to halt the inflow of migrants.