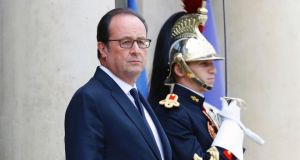 France’s central bank governor warned presidential candidates on Tuesday that French credibility in Europe hinged on the country respecting the current government’s plans to bring the public deficit in line with European Union limits next year.

The main conservative candidates all have programmes that would put France on course to break the current Socialist government’s promises to cut the deficit to less than 3 per cent of economic output next year.

“All of our European partners expect our deficit to be at less than 3 per cent in 2017,” Bank of France governor François Villeroy de Galhau said on Europe 1 radio. “If we are going to be listened to and believed, then getting to less than 3 per cent is a central condition for our credibility and influence in Europe,” he added.

In preparation for the publication of the 2017 budget at the end of the month, President François Hollande’s government is to update its main economic and deficit forecasts on Tuesday.

So far it has targeted a deficit of 2.7 per cent of GDP next year, which would be the first time in a decade that the deficit was in line with the EU’s target of no more than 3 per cent.

The European Commission has been criticised for not punishing countries that overrun EU budget and debt targets, after it spared Spain and Portugal this summer despite their excessive budget deficits. – (Reuters)

1 Google tells workers to return to country where they are employed
2 Sean Quinn stunned at rebranding of Quinn Industrial Holdings
3 Probate is changing: What does that mean for you?
4 Will tracker mortgage be at risk if Ulster Bank closes?
5 Whistleblower warned EY of Wirecard fraud four years before collapse
6 Google ups bid to clinch approval for $2.1bn Fitbit takeover
7 Subway franchisee loses Supreme Court claim for zero VAT liability
8 Seán Quinn on rebrand, Irish golf tourism wipeout, and probate changes
9 Three Ireland switches on 5G network around the country
10 Me & My Money: ‘Money can’t buy you happiness but it can make life a lot easier’
Real news has value SUBSCRIBE