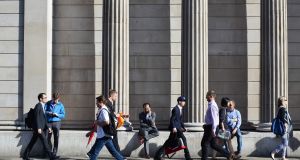 Commuters pass outside the Bank of England in London on Friday morning Photograph: AFP

Mark Carney said the Bank of England is ready to pump billions of pounds into the financial system as he stands at the front line of Britain’s defence against a Brexit- provoked market crisis.

The Bank of England governor declared that the central bank can provide an extra £250 billion (€312bn) through its existing facilities. It also has further measures if needed to deal with what he described as a “period of uncertainty and adjustment” after the UK voted to end their 43-year membership of the world’s largest single market.

Sterling plunged to a three-decade low, British and global stocks tumbled and European bond spreads widened as the Brexit vote unfolded on Friday. Investor bets on a July interest-rate cut rose and Standard & Poor’s said the UK will lose its top credit rating.

“Some market and economic volatility can be expected as this process unfolds,” Mr Carney said in a televised statement in London after the referendum result. His comments followed UK prime minister David Cameron’s announcement that he will step down this year, which will inject political uncertainty into an already volatile period.

The Bank of England has been preparing for more than a year to deal with this outcome and Mr Carney, who is likely to make a televised statement, will now have to rely on that crisis playbook to stem panic in financial markets. With the result announced on a normal trading day, the immediate threats of Brexit could include investors dumping UK assets and a drying up of bank funding.

Institutions including the US Federal Reserve and the European Central Bank are primed to pump liquidity into the system if needed. Mr Carney said UK policy makers will assess conditions in the coming weeks and “consider any additional policy responses.”

The Bank of England has already added extra auctions this month to make funds available to lenders. It could cut its key interest rate to as low as zero from 0.5 per cent, perhaps immediately, analysts at ING Bank NV said in a note to clients. Traders are pricing in a more than 50 per cent chance that the Bank of England will cut borrowing costs by its July meeting, according to data compiled by Bloomberg using swaps on the sterling overnight index average.

The Bank of England “has undertaken extensive contingency planning and is working closely with HM Treasury, other domestic authorities and overseas central banks,” it said in a statement early on Friday.

“The Bank of England will take all necessary steps to meet its responsibilities for monetary and financial stability.”

Bank of Japan governor Haruhiko Kuroda said on Friday that central banks will do their utmost to provide liquidity. Central banks around the world have been on high alert, and the chiefs of the Fed, BOJ, the Bank of Canada and the Swiss National Bank cited the referendum as being potentially disruptive.

As well as intensive supervision to ensure banks had enough cash ahead of the vote, Bank of England plans include additional funding operations and activation of swap lines with other central banks to help firms access overseas currencies. It also has a number of other “stability measures” available, though policy makers haven’t provided details in advance.

What happens next depends on how markets play out . At the time of the Scottish independence referendum in 2014 - where a potential splintering of the UK was averted - the Bank of England’s Financial Policy Committee emphasised readiness to “take steps rapidly” if needed.

Beyond the immediate market ructions, there are longer-term policy issues. While Mr Carney’s view was that the next Bank of England interest-rate move is “more likely to be up than down,” that was conditioned on a “Remain” decision.

Recent signs have pointed to a UK economic slowdown, and the possible consequences of Brexit may include a spike in inflation, a rise in unemployment and even a recession. The Bank of England potentially faces what Mr Carney has described as a “challenging trade off” between supporting growth and employment and stabilising inflation.

The central bank has cited the UK’s record current- account deficit as a potential vulnerability, saying “an abrupt decline in capital inflows could pose a major financing difficulty.”

Data in March showed the difference between money coming into the UK and money sent out widened to £32.7 billion in the fourth quarter. That equates to 7 per cent of GDP, the most since records began in 1955.