An extraordinary weekend in the history of the euro zone 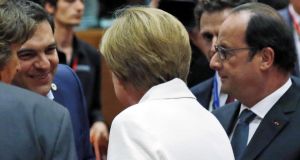 The dust has still to settle, but we have witnessed an extraordinary weekend in the history of the euro zone. It was about Greece, but it was about much more, as well. It was about who was in charge and how the euro zone should be run, with clear blue water appearing between the two countries at the centre of the single currency, France and Germany.

It was also about how Europe handles crises and the increasingly strong evidence that a process involving 19 national governments creates huge barriers to getting things done efficiently. When you are worrying not only about the problem at hand but also about everything from Finnish domestic politics to Spanish sensitivities, it does not lead to quick decisions.

There is always a danger of over-interpreting events in their immediate wake. But the open breakout of hostilities between euro zone members may be an important moment for the single currency. Germany wants things run its way, going as far this weekend as floating the idea of a temporary euro zone exit for Greece if a deal cannot be done.

Its hard line has some support, from Finland, Slovakia and the Baltic countries and its old ally, the Netherlands. France, on the other hand, was trying to help Greece to broker a compromise and spoke of the huge damage which would be caused by a country leaving the euro zone.

For the future of the euro zone, the concept of a country taking a “time out” is possibly even more damaging than one leaving, even if ultimately they are the same thing. As Belgian economist Paul De Grauwe tweeted on Sunday: “Temporary Grexit is like temporary divorce. Most if not all end up being permanent.”

We saw how the financial markets picked apart the old exchange rate system which EU countries operated in the early 1990s. The danger of floating the temporary exit option is starting this kind of contagion, perhaps not immediately but at some stage, most likely through pressure on government bond markets of countries under budgetary pressure.

The idea of temporary exit is, we are told, that it would give Greece time to restructure its debts. It looks unlikely that this could be done on any kind of agreed basis, unless Europe offered significant ongoing support. Germany holds that such debt restructuring is impossible within the euro zone, though the basis for this claim is not clear. Much of what it has done over the weekend suggests it actually wants a Greek exit, rather than just threatening one to get the Greek government to do what it wants.

It was evident from the crisis of recent years that the euro project was unfinished. Most single currency areas have a large central budget and a central bank which acts as lender of last resort in all circumstances. In contrast Europe has no significant federal budget and a central bank whose mandate is clearly affected by political considerations. The decision of the ECB not to provide extra funds to the Greek banks in recent weeks has been a key factor in the drama.

This is why it is pushing the idea of fiscal austerity so hard and is so resistant to debt restructuring. Germany believes that if countries want the benefit of being in a currency with it, they have to play by German rules. Never has this been as clear as it was over the weekend.