€73 billion gulf in data on US firms’ Irish profit 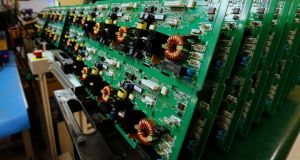 US statistics show that Irish-incorporated subsidiaries of US multinationals made profits of $147 billion in 2011, although the Revenue Commissioners estimated that the net taxable profits for all companies that year were just €40 billion.

The difference between the two figures is down to the existence of Irish-incorporated subsidiaries of US multinationals that are not tax-resident here but are tax-resident in offshore locations such as Bermuda.

It is the use of such companies by multinationals such a Google, Microsoft and Apple that has brought unwelcome global attention to Ireland’s role in their tax affairs.

The amount of all taxable corporate profits in the State accounted for by US-owned companies is not known but is likely to be a considerable proportion of the overall Revenue figure.

The data from the US Bureau of Economic Analysis, which shows that Irish-incorporated US subsidiaries paid an effective tax rate of 2.2 per cent in 2011, is contained in a paper published yesterday by the Department of Finance.

The paper examines the various methodologies that exist for estimating the effective tax rate paid on corporate profits in Ireland and concludes that the most appropriate methods show the rate averaged slightly below the nominal 12.5 per cent rate since 2003.

It is normal for the companies to pay slightly below the nominal rate as they are able to write off certain sums against tax.

The paper, written by University College Cork economist Séamus Coffey, and Kate Levey of the Department of Finance, is to be supplied to the Oireachtas Committee on Finance, Public Expenditure and Reform.

It found that the methods used by the Central Statistics Office and the Revenue Commissioners are the most appropriate for determining Ireland’s effective tax rate for corporate profits.

This is because, Mr Coffey told The Irish Times , the CSO and the Revenue are trying to work out what is happening within the tax system in Ireland. The CSO figures show that, since 2003, the effective tax rate has averaged 10.9 per cent, while the Revenue shows an average of 10.7 per cent over the same period.

The difference can be explained by the effect of retained losses on a company’s tax bill.

The Coffey report notes that total sales for the Irish-incorporated companies examined by the US bureau, at €230 billion, were greater than the total exports from Ireland recorded in 2011 (€167 billion).

“It is likely that in many cases, these are companies which were born here through their incorporation, but which live somewhere else. It is somewhat similar to the Irish income tax system, which does not levy income tax on Irish nationals who live abroad.”

Other methodologies considered, such as ones used by the European Commission and the World Bank, and which show higher effective rates that those produced by the CSO and the Revenue, are also examined.

Feargal O’Rourke, head of tax at PwC Ireland, said the report’s findings were very important in the context of the current global tax debate. He said it “nails once and for all the debate over what Ireland’s effective corporation tax rate is, and it is not 2.2 per cent”.

Brian Keegan, of Chartered Accoutants Ireland, praised the “robust analysis” contained in the report. “Research such as this is good for our international reputation, and contributes in a positive way to the international debate on tax competition.” he said.

However Richard Boyd-Barrett, of the People Before Profit Alliance and a member of the Oireachtas committee that will consider the report, said he strongly disputed its findings. Mr Coffey was pre-empting the investigation that had yet to be carried out by the sub-committee set up to look into it, he said, describing the report’s findings as “controversial and heavily disputed”.